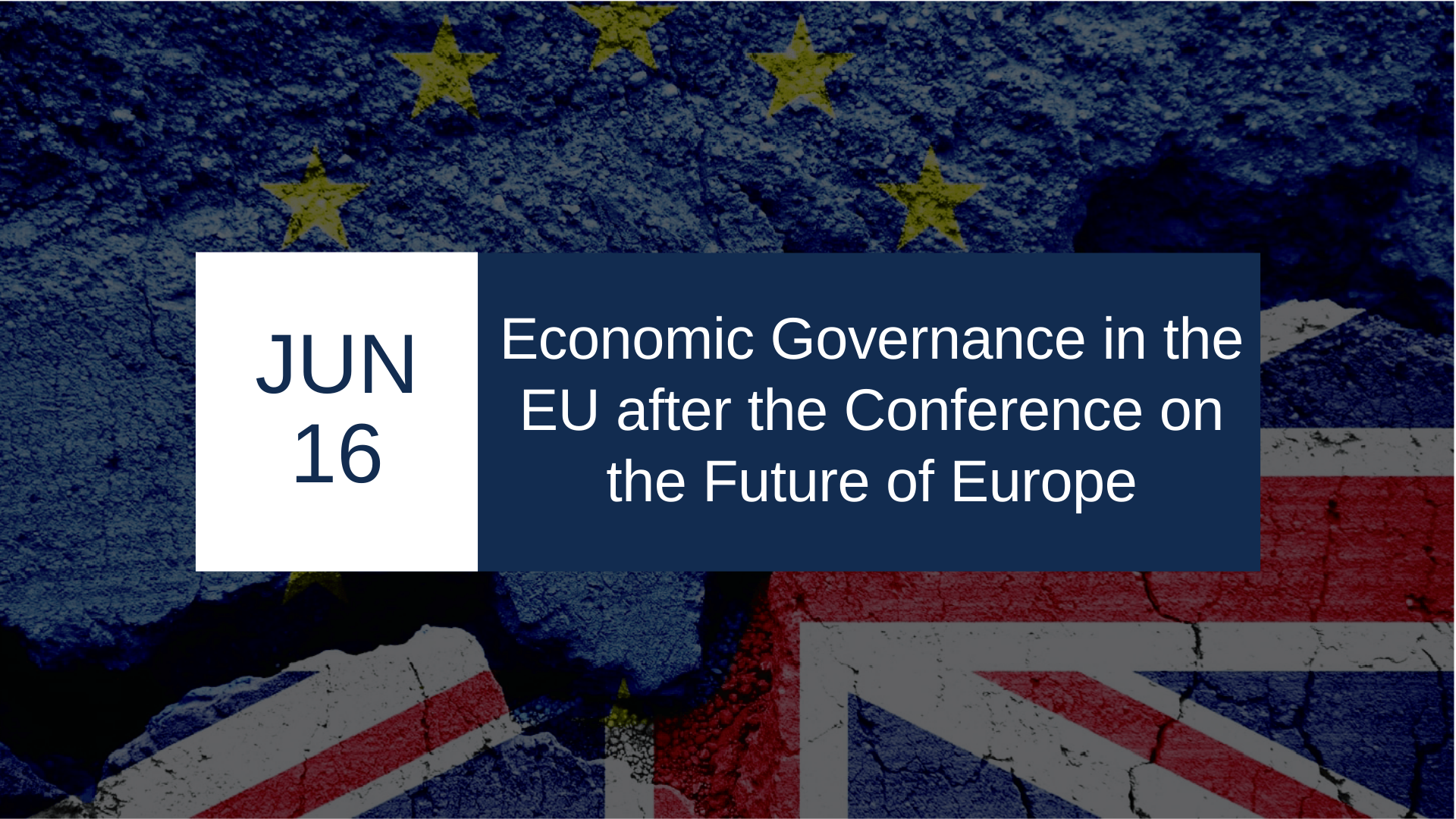 Event Report: Economic Governance in the EU after the Conference on the Future of Europe

On Thursday 16 June 2022, the Jean Monnet Centre of Excellence REBUILD and the DCU Brexit Institute held an event on “Economic Governance in the EU after the Conference on the Future of Europe.” It consisted a panel discussion chaired by Federico Fabbrini (Professor of EU Law & Founding Director, DCU Brexit Institute), which included contributions by Neale Richmond (Member of the EU Affairs Joint Committee of the Irish Parliament), Kalypso Nicolaidis (Professorial Chair of Global Affairs at the EUI School of Transnational Governance), Paul Dermine (Referendaire at the European Court of Justice and author of “The New Economic Governance of the Eurozone” (Cambridge University Press, 2022)), and Sergio Battelli (Chairman of the EU Affairs Committee of the Italian Chamber of Deputies).

After some welcoming remarks from Federico Fabbrini, Neale Richmond discussed his experience as a delegate to the Conference on the Future of Europe. He began by noting that the Conference took place in two parts, before and after the Russian invasion of Ukraine, which underscored the seriousness of the issues under discussion. Richmond was critical of some aspects of the Conference: it was a bit disorganized at times, with a tendency to be dominated by debates among MEPs that ignored the concerns raised by citizens. In the end all the recommendations were just accepted, without there being real votes. In his experience there were two clear camps of centre-left vs. centre-right, with citizens stuck in the middle. Certainly, citizens were interested in “more Europe” in terms of spending, and more action on climate. He noted that sometimes citizens would make recommendations that the EU do things that it is already doing, which points to the need for better communications.

Kalypso Nicolaidis began her remarks by noting that she had attended one of the citizens panels, which was held in Florence, on democracy. She noted the confluence of the Conference with the NGEU, which marks an important institutional change in the form of mutualization of debt. She adjudged that this change is likely to be permenent. She emphasized the need for accountability in the implementation of NGEU. To this end, she voiced three basic principles. 1. No spending without taxation. 2. No taxation without representation. And, 3. No representation without participation. With these in mind, she thought that the spirit of the Conference and NGEU could revivify the debate over the future of Europe.

For his part, Paul Dermine focused on NGEU, which he thought was a revolutionary initiative – representing a rare moment when taboos are broken and the impossible becomes possible. In this regard, he cited two main problems. The first was regarding the constitutional and legal basis of NGEU. Just as was the case with the economic governance measures brought in to address the Eurozone crisis, NGEU was brought in within the existing treaties. It was based on the “emergency clause” of the treaty (Art 122); it amounted to the mobilization of cohesion policy to bring about a new autonomous industrial and economic policy. This was appropriate in the circumstances of the pandemic, but it will need to be put on firmer constitutional foundations for the future, if it is to be the first step towards a fiscal union. The second problem is that NGEU has been implemented through executive dominance. Just as with the Eurozone crisis, the plan has been centralized through the Commission and national governments, with insufficient parliamentary involvement either at the EU level or national level. He approved of those recommendations of the Conference to make NGEU permanent, which will require amending the treaties, and reform the European Semester and the fiscal rules in order to increase the social orientation of economic governance.

In a video message, Sergio Battelli emphasized the need to reform fiscal and tax policies, including the prevention of tax evasion, and argued that it was necessary to make these policies subject to qualified majority voting rather than unanimity. To this end, he cited th importance of taxing the digital giants. He was in favour of green and digital transitions and the reduction of the EU’s dependency on energy imports. In addition, he thought it necessary to increase transparency and make citizens part of the decision-making process. Some of these changes could be implemented by the EU using its existing powers; but we should also not rule out revision of the treaties. The EU should be made stronger and able to act more swiftly; and NGEU should be made a permanent tool.

A lively discussion ensued in which the participants debated about whether new taxed would be levied by the EU, and in what form. Another point of discussion was the merits of democratic mechanisms such as citizens’ assemblies which are extensively used in Ireland’s political debates. It was noted that the Irish Taoiseach, Micheál Martin, recently made a speech in Strasbourg in which he said that his government is open to treaty change – even though any such change would probably require a referendum in Ireland, with all the uncertainty that would entail. The war in Ukraine has shown that the EU does have the capacity to move quickly; it also reminds us to come back to the basic question, of what is the EU for?