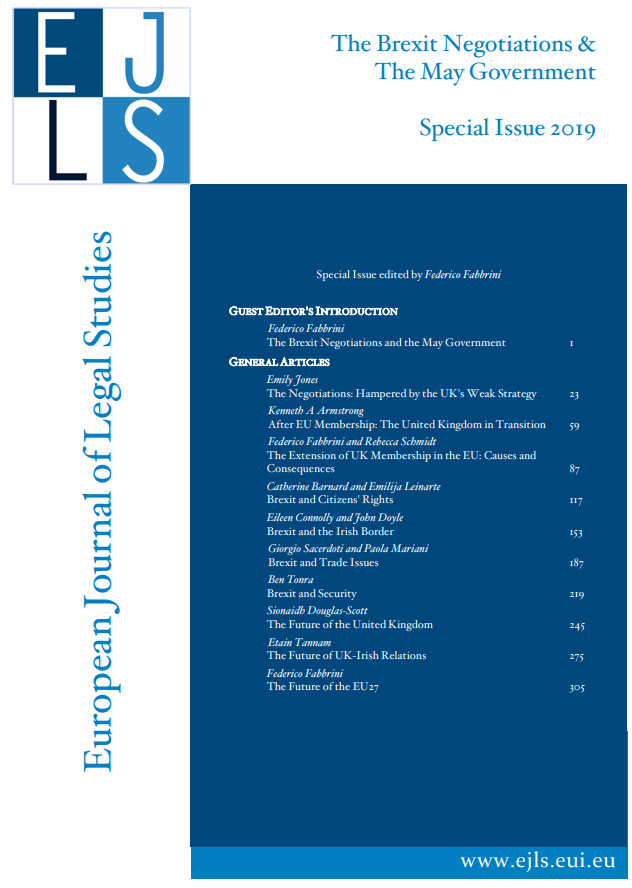 Publication of the Special Issue “The Brexit Negotiations and the May Government” (ed. F. Fabbrini)

A Special Issue of the European Journal of Legal Studies on “The Brexit Negotiations and the May Government”, edited by Federico Fabbrini (Director of the Brexit Institute) has been published on October 31, 2019. The Special Issue has been launched on the occasion of the kickoff conference of the BRIDGE Project at Dublin City University.

The Special Issue features top-notch contribution by leading experts in the field of EU and UK Public law with a particular focus on the legal consequences of Brexit. Inter alia, the Special Issue features contributions by Kenneth Armstrong, “After EU Membership: The United Kingdom in Transition”; Catherine Barnard and Emilija Leinarte, “Brexit and Citizens’ Rights”; Eileen Connolly and John Doyle, “Brexit and the Irish Border”; Paola Mariani and Giorgio Sacerdoti, “Brexit and Trade Issues”, and Sionaidh Douglas-Scott, “The Future of the United Kingdom”.

The Brexit Institute is especially proud of this achievement and congratulates its Director for being able to put together and coordinate the publication of topical contributions in a key moment of the history of the relationship between the United Kingdom and the European Union.

The Special Issue is open access and can be downloaded on the webpage of the European Journal of Legal Studies.