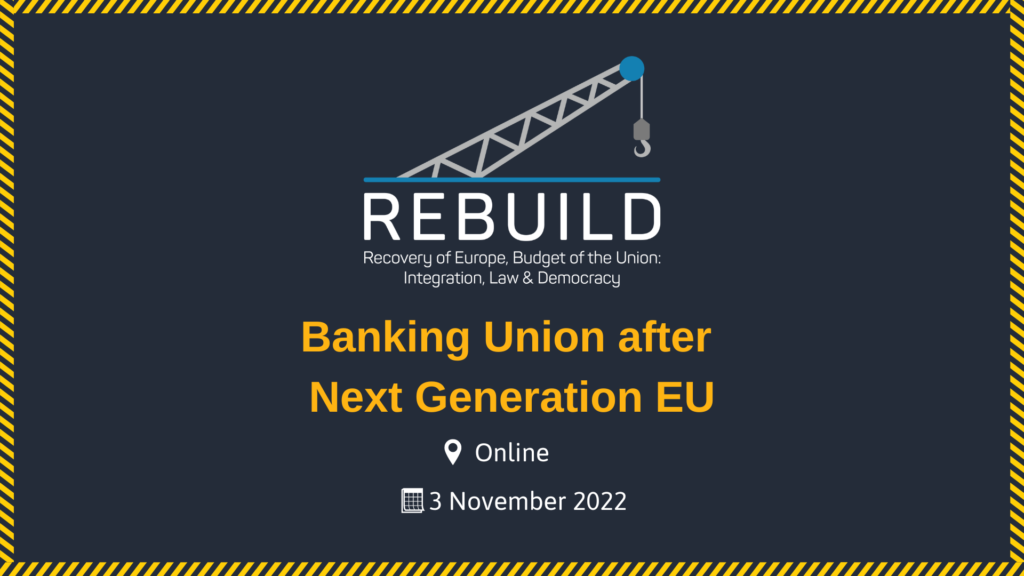 The welcoming remarks of Christy Petit focused on introducing the ramifications of the Next Generation EU and the interlinkages between the implementation of recovery programs after the COVID-19 pandemic and the several challenges still present at the level of the Banking Union (BU). After introducing the speakers, the floor passed to Director General Texeira.

Pedro Texeira conveyed some general introductory remarks focused on the title of the event, giving his perspective concerning the link between the BU and the response to the pandemic. By highlighting some results of the reforms that addressed the sovereign debt crisis by creating the Single Supervisory and Resolution Mechanisms (‘SSM’ and ‘SRM’), he argued that they represent “one of the most perfect systems of EU integration”, stating that “no sector is as ‘Europeanised’ as the EU banking sector”. Switching to the Next Generation EU, he focused on risk sharing between EU Member States (MS). He recalled the main objective of the BU of breaking the ‘doom loop’ between banks and sovereigns, pointing out that European liabilities can be achieved only if there is also EU control and that is why the SSM was created as a pre-condition for risk sharing. In his opinion, the pandemic proved that risk sharing between MS can work. In fact, for the pandemic the response came directly from the EU while, for the Global Financial Crisis (GFC), it came through intergovernmental solutions. At this point, Pedro Texeira questioned whether the response to the pandemic is going to represent an unreversible step towards EU risk sharing. In his opinion, European safe assets, as those based on the bonds issued in the framework of the Next Generation EU, are a low cost and low risk financial asset and a symbol of solidarity, which gives an assist to break the link between banks and sovereigns. He concluded by mentioning that, after the pandemic, the EU is facing new challenges which affect all EU MS but to a different extent and the EU has two options to tackle them: through a common unified response via a joint fiscal capacity or a mix of national and supranational fragmented solutions. In this respect, he warned that, by learning from the previous management of crises, European integration is not sustainable without a European stabilisation capacity. You can read more in this paper about “The future of the Banking Union after the pandemic” (Teixeira, 2021).

Following Director General Teixeira’s introduction, Jens-Hinrich Binder discussed the second pillar of the BU, the SRM. While labelling the preparatory activities of the SRB, such as those concerning ‘bail-inable’ resources and the identification of the impediments to resolvability as a great success, he flagged three important aspects of the actual resolution framework. Those aspects regarded the prolonged stagnation on the institutional front which is indicative of the broader conflict between MS on mutualisation of risk sharing arrangements; the impressive progress of (legislative and administrative) technical arrangements, such as the “daisy chain regulation” which put the EU regulatory framework in line with international standards; and the fact that the third pillar of the BU (i.e., deposit insurance) should and could expand to include resolution or insolvency for small and medium-sized banks (i.e., Less-Significant Institutions – ‘LSIs’), or for Significant Institutions (SIs) not passing the Public Interest Assessment (PIA). Professor Binder considered this last aspect a significant but controversial step for the future. He concluded saying that a great range of success has been achieved but a lot remains to be done. However, he argued that not all the items in the reform agenda should be considered as achievable.

From the perspective from his previous role at the EP, Brian Hayes commenced his contribution to the conference by largely agreeing with the previous presenters. He stressed the importance for bankers and supervisors to have the humility in acknowledging errors in their predictions. In this respect, for the unique circumstances that we are facing, and in order to avoid past mistakes, he suggested robust assessments and a wider range of presumptions. Then, by referring to the devastating effects of the GFC in Ireland, he considered the Capital Requirements Regulation (CRR) and the Capital Requirements Directive (CRD) as a great legislative success in reducing risk and in providing significant stability mechanisms to keep banks’ balance sheet safe. He joined the chorus in arguing that common deposit insurance is yet to come as a result on the debate on risk sharing versus risk reduction. He also argued that the daisy chain regulation is an example where the EU can foster global standards. However, Hayes flagged two main problems: the challenges that international investors face in understanding the interplay between supervisors and regulators and the fact that the regulatory approach in Europe is a ‘look back’ approach. In his opinion, better regulation needs standards that are looking forward.

The last panellist, Professor Blanaid Clarke discussed the supervisory aspects of the BU in the context of Irish banks, focusing on governance issues. By looking back at Ireland during the GFC, she cited several reports that found problems in the banks’ governance. Professor Clarke considered the EU regime as positive by mentioning the Fit and Proper (FAP) rules contained in CRD IV. In this respect, she highlighted the difference in practice and implementation of governance rules across the EU. She argued that banks have a social licence and have great responsibility both for customers and financial stability. Indeed, banks have been part of solution and not the problem by reducing the economic and social outcome of the pandemic. She discussed how, in Ireland, public trust in banks is still very low, stating that “once trust is lost, it’s hard to rebuild it”. In this respect, she welcomed the introduction of a new piece of legislation, the Central Bank (Individual Accountability Framework) Bill 2022 introducing a multi-faceted approach to bank culture, improvements in FAP regimes and enforcement rules in order to hold individuals accountable. Professor Clarke welcomed the fact that such standards have also been taken on board in the EU banking package 2021. She concluded that in terms on governance a lot of positive steps forward have been taken but more must be done.

The closing remarks by Christy Petit were preceded by an engaging debate on some of the unfinished items of the agenda for the completion for the BU, where successes and failures of this ongoing project have been thoroughly highlighted. In this respect, by looking at a ten-year horizon, the panellists mentioned several key drivers to achieve, such as digitalisation, climate change, governance, anti-money laundering, and cyber risks.