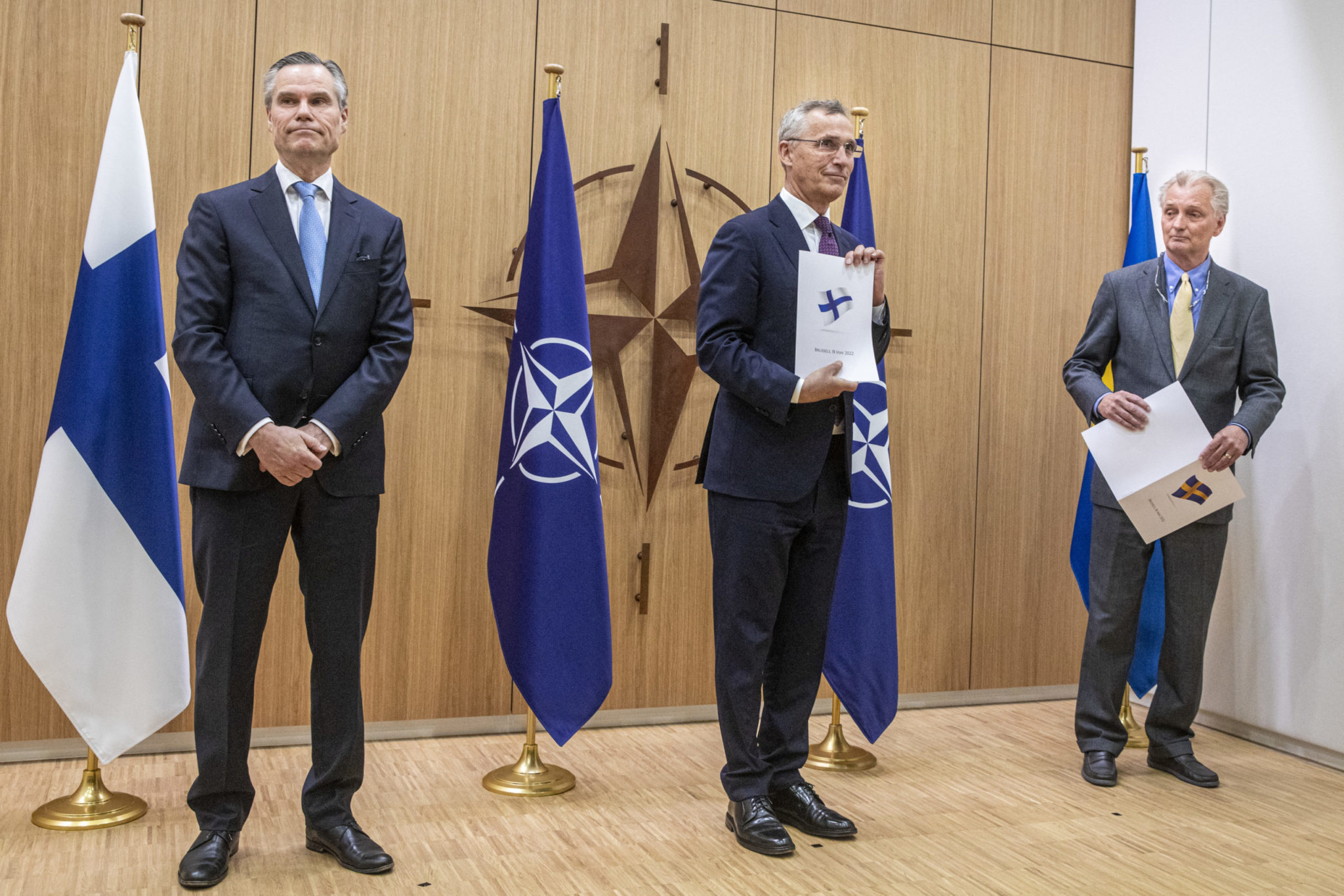 Russia’s expansive military assault on Ukraine beginning on February 24 2022 has been devastating for security in Europe. As all European Union (EU) and North Atlantic Treaty Organisation (NATO) member states re-evaluate their security arrangements, Finland and Sweden have taken landmark decisions to join NATO. Applying for NATO membership in May, both were invited to join the alliance at NATO’s Madrid Summit in June 2022, and ratification by NATO’s thirty existing members is currently ongoing. Sweden had formally abstained from military alliances since the early 1800s, when it conceded territorial interests in Europe outside the Scandinavian Peninsula. Finland was neutral throughout the Cold War, maintaining this because of the threat from the Soviet Union, its superpower neighbour. All European democracies with some coinciding interests outside NATO, Finland, Ireland and Sweden have cooperated closely on some security matters in the past. Finland and Sweden have earned the tag “like-minded” states for Ireland in the latter’s political discourse, but some comparative examination of neutrality policies and cooperation with NATO casts doubt on such claims.

A role in the world

Finland and Ireland were two of sixteen states admitted to the United Nations (UN) in 1955. Despite limited resources as smaller neutral states, Dublin and Helsinki soon perceived norm entrepreneurship as a way to strengthen their role in the world. Finland and Ireland were both instrumental in the creation of the Treaty on the Non-Proliferation of Nuclear Weapons (NPT) that is still vital to global disarmament efforts. This achievement was symbolised when Finland became the first state to sign the treaty and Ireland’s Minister for External Affairs Frank Aiken the first minister to do so before the NPT came into force in 1970. A recent editorial in the Irish Times made an overly-simplified claim that Irish foreign policy mostly synchronised with NATO except for nuclear non-proliferation policy. NATO upholds nuclear deterrence, but more recent nuclear disarmament initiatives by coalitions of smaller states have not been as successful compared to earlier NPT efforts. Proposals under the New Agenda Coalition; the Humanitarian Initiative; and the Treaty on the Prohibition of Nuclear Weapons (TPNW) have not gained enough traction to ease serious regression in global non-proliferation.

As Russian leaders openly signal nuclear threats against Western states and China expands its nuclear arsenal, nuclear arms control will be primarily shaped by three top-tier nuclear powers – the US, Russia and China. Incremental and multi-polar negotiation between Washington, Moscow and Beijing looks the most realistic prospect for a global arms control regime to function effectively. In addition to EU non-proliferation policies, policymaking within NATO is vital for European states seeking to influence nuclear arms control. Institutionalised consultation through NATO maximises Europe’s influence on US grand strategy. Nordic NATO members are likely to keep realistic arms control and disarmament policies prominent on NATO’s agenda, but Ireland’s absence from the alliance leaves it marginalised from these crucial transatlantic discussions.

Ray Murphy argues that “the effects of Ireland’s policies at the UN, its history under colonial rule and non-membership of a military alliance, combined to make Ireland acceptable as a ‘middle power’ contributor to peacekeeping activities”. However, neutrality was not always a prerequisite for contributions to UN peacekeeping even during the Cold War. From NATO’s founding members in 1949, Canada, Denmark and Norway each had a formative role developing early UN peacekeeping principles. The Nordic Standby Forces Manual (nicknamed “the Blue Book”) was the result of cooperation between NATO members (Denmark, Iceland and Norway) and neutral states (Finland and Sweden). The Manual has endured as an influence for UN peacekeeping policy, codifying many “best practices” for all states undertaking these operations. Ireland’s recent campaign for an elected seat at the United Nations Security Council (UNSC) saw it raise its credentials as a long-term contributor to UN peacekeeping, but NATO membership has not obstructed some other states from reaching achievements that equal or surpass those of Ireland at the UN.

Shared commitments to military non-alignment; liberal values; norm entrepreneurship; and multilateral institutions have long led Dublin to consider Finland and Sweden as “like-minded”  in foreign policy. This was further emphasised from a broader political and economic angle in Ireland’s first documented strategy for the Nordic region in 2021, connecting with Dublin’s wider post-Brexit policy adjustments in the EU. However, divergence between Ireland, on one side, and Finland and Sweden, on the other, has widened profoundly on NATO policy in recent decades. Finland and Sweden undertook some military downsizing in the 1990s and 2000s, but, in contrast to Ireland, both retained significant defence capacity and developed crucial partnerships with NATO. Unlike Ireland, maintaining vigilant defence postures while actively extending cooperation with NATO through Nordic Defence Cooperation (NORDEFCO) and being in the EU, leaves neither Finland nor Sweden as “net consumers” of collective security in Europe today.

With a record of effective cooperation in both UN peacekeeping operations and nuclear non-proliferation initiatives, Finland is the Nordic state that Ireland has arguably had the closest security link with. However, Finland’s neutrality and later its military non-alignment were based on different logic than Irish policies. Cold War neutrality termed as “Finlandisation” was forced on Finland by the Soviet threat; this prevented occupation and Sovietisation, and Finland could develop as a democracy and market economy. Ireland did not face the same geopolitical constraints; it declined early invitations to join NATO, not wanting to be part of the same military alliance as the UK with which it had a territorial dispute over Northern Ireland. Nevertheless, Irish diplomats did not perceive neutrality as preordained; Dublin was open to a bilateral defence pact with the US which Washington declined, seeing the idea as contradictory to NATO’s collective action.

What “Finlandisation” entailed in domestic and foreign policy is understood as a “difficult period in Finnish history”; remembering the political, social and media self-censorship this involved can cause some “regret and embarrassment” in Finland today. Helsinki and Stockholm’s Cold War neutrality dictated formal abstention from the main military and political blocs that rival superpowers institutionalised in Europe. This is why Finland and Sweden chose to discard neutrality when joining the EU in 1995, instead redefining their strategic outlook as “militarily non-aligned, while becoming politically aligned in the EU” as well as the wider West. This is a curious contrast with Ireland that joined the EU much earlier in 1973 and proudly maintains strong transatlantic political and economic relations with the US, while still keeping “neutrality” central in its foreign policy discourse. From a purely theoretical lens, neutrality has many facets, but in practice, in Ireland, some facets are much more desirable than others. Within the wider Western response to Russia’s war in Ukraine, it has been difficult for Dublin to get its foreign policy message across clearly. Multiple clarifications have been needed from Irish leaders to convey to domestic and international audiences that Ireland is not “politically neutral” but, while outside military alliances, it backs EU support for Ukraine and Western sanctions on Russia.

“Finlandisation” has been regularly proposed as a possible model for peace in Ukraine. Zbigniew Brzezinski and Henry Kissinger were proponents, and even French President Emmanuel Macron might have indicated sympathies for the idea. Despite these suggestions, reaction in Finland has often been that “Finlandisation” is not desirable for Ukraine or any other state; its localised specifics transferred from history are unlikely to work elsewhere. Finland’s Cold War neutrality could rely on a homogenous cultural identity, a strong military and unity behind its political leadership. These domestic conditions are difficult to replicate in Georgia, Moldova and Ukraine struggling with geopolitical pressures since the 1990s. Criticising “Finlanisation” for Ukraine, former Finnish diplomat René Nyberg has argued: “Instead of comparing Finland and Ukraine, we should all, and the Russians in particular, consider instead the remarkable achievements of the central European and Baltic countries over the past two decades”. Having restored independence after the collapse of communism, the Baltic states and others in Central and Eastern Europe (CEE) quickly rejected neutrality and made successful transitions to liberal democracy and market economies. This was anchored in the political, economic and security incentives that the EU and NATO combined to offer.

Nevertheless, despite CEE, Finnish and Swedish policies accelerating away from neutrality, in a letter to non-legislative presidents in Europe in March 2022, Irish President Michael D. Higgins curiously reintroduced neutrality into the debate on solutions for peace in Ukraine, outlining that a commitment to neutrality from Kyiv could support a ceasefire and even a “lasting peace”. It can be suspected that Higgins’ suggestion corresponds with the Irish anomaly where neutrality is desired, but, since 1945, has never been seriously tested as a safeguard for national security. His outlook contrasts with Finnish commentators perceiving neutrality as externally imposed, denying sovereignty to choose security arrangements and – forgoing collective defence guarantees – creating nervous isolation.

Finnish President Sauli Niinistö has stated that Helsinki revised its policy from neutrality to military non-alignment after the Cold War through its “own will”, even while it welcomed NATO enlargement nearby in the 1990s and 2000s as benefitting regional security. However, in the months before its invasion of Ukraine in February 2022, Russia’s demands that NATO refuse new members caused deep unease in Helsinki and Stockholm. This threatened the sovereignty of European states to freely choose their security arrangements, a principle universally agreed by all Organisation for Security and Cooperation (OSCE) member states after the Cold War. As Russian aggression escalated, public opinion in Finland and Sweden resoundingly favoured NATO membership. Irish sovereignty over its security arrangements is not under threat and recent opinion polls suggest a 66% majority in favour of continued neutrality. Nevertheless, Finland and Sweden’s path to NATO membership should further illustrate to Irish audiences that the Western alliance synchronises closely with Ireland’s values and security priorities.

Eoin Micheál McNamara is a PhD candidate in political science at the University of Tartu in Estonia. From October 2021-June 2022 he was a visiting research fellow at the Finnish Institute of International Affairs in Helsinki.