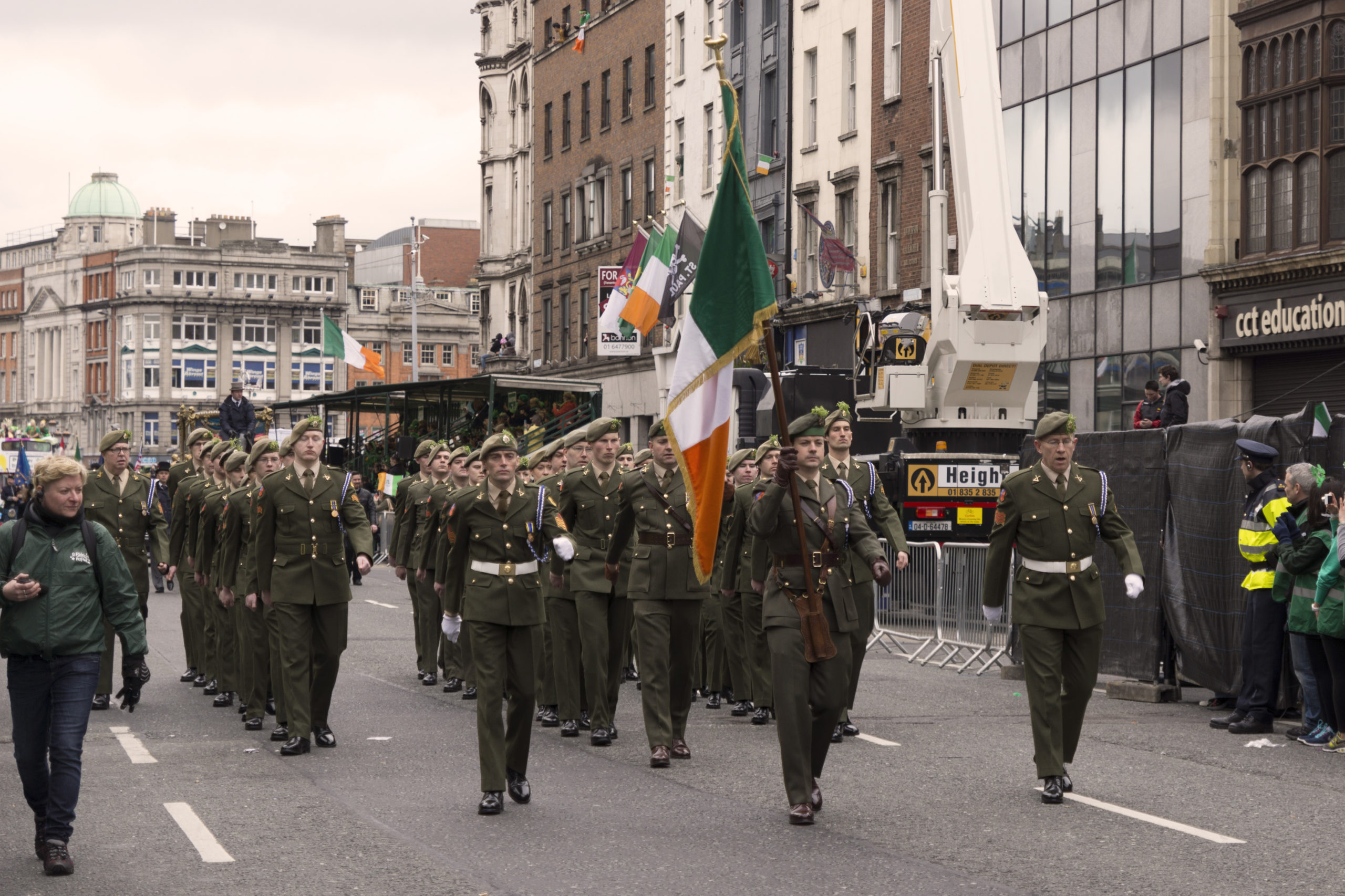 In a recent Irish Times article, retired Defence Forces (DF) officer Dorcha Lee recalled a startingly honest claim attributed to T.K. Whitaker, the senior civil servant acclaimed for his contribution to policies that renewed Ireland’s economic development during the 1950s. In Lee’s account, Whitaker interpreted Dublin’s decision to invest less on defence compared to its Western European neighbours as “a gamble on peace”. Resources otherwise consumed by the defence sector could instead be invested elsewhere to boost social and economic modernization. Neutrality during World War II (WWII) allowed Ireland to escape much bloodshed, and as Cold War tensions between the US and the Soviet Union soon followed, a geographic location “safely tucked away behind Britain” was permissive for Ireland to do what alliance theorists call “free-riding” on the wider collective security produced by neighbouring members of the North Atlantic Treaty Organization (NATO). For sure, outside NATO, Ireland never had the Article 5 security guarantee, but NATO’s wider deterrence fostered stability in Western Europe that benefited Ireland significantly, even if Dublin did not contribute much in return.

This so-called “gamble on peace” might still have looked a good bet at the end of the Cold War: liberal democracy had gained accelerated momentum, and many post-communist states joined NATO and the European Union (EU) during the late 1990s and 2000s. Even closer to home, the Belfast Agreement in 1998 began to underpin a stronger peace on the island of Ireland. Suffering a severe economic crisis after 2008, Ireland eventually rebounded, proving itself no longer a deficient peripheral Western economy isolated in Britain’s shadow. Drawing much economic prosperity from global interconnectivity, Ireland has gained an elevated place in the modern world, “an island at the centre of the world”, as this was framed by Time magazine in 2017. In David McWilliams’ words “few societies in the world have been so positively transformed by the economic opportunities arising from globalisation as Ireland”, but while immensely beneficial on many counts, this transformation still creates underlying pressures for Ireland’s security. A series of recent governments have remained strikingly reluctant to address this predicament, a problem that has now gained much closer scrutiny with the February 2022 publication of the Commission on the Defence Forces (CoDF) report, and Russia’s full-scale military assault on Ukraine.

Credited for its honesty and detail, the CoDF report identified problems with DF’s organisational culture, recruitment and retention, and vulnerabilities in cyber, airspace and maritime security. The report confirmed weaknesses that some experts had already been drawing attention to over recent years. Rising tension between the West on one side and Russia and China on the other is frequently referred to as “a new Cold War”, but this is a flawed analogy. Unlike the twentieth century Cold War, often de-territorialized hybrid interference will now figure prominently as global conflict escalates, focusing a closer spotlight on Ireland’s security predicaments. Government neglect and DF decline now seem a “gamble on peace” too far. When Whitaker is claimed to have mentioned this idea, during the Cold War in the 1970s, Ireland gained far more shelter from the territorialized Westphalian security conditions in existence then. Russia’s war in Ukraine and China’s escalated threats against Taiwan remind us that irredentist territorial aggression still threatens some, but in a tightly interdependent world, great power competition will also increasingly focus on controlling and disrupting global connectivity. As a major gateway for this connectivity, Ireland is exposed, much more at risk from new ways of aggression, but its security and defence policies are not nearly keeping pace with this profound international change. The peace in Western Europe that Dublin has long “gambled” on is now deteriorating into the “hybrid” conditions of low-intensity conflict across many civilian and military fronts.

Russia instrumentalizes military intimidation against states that oppose its strategic aims, the naval exercises Moscow originally planned within Ireland’s Exclusive Economic Zone (EEZ) in February might have culminated in a “ruse” to distract attention away from the redeployment of its cruise-missile carrier, the Marshal Ustinov, from northern Russia to the Mediterranean in preparation for attacks on Ukraine from the Black Sea. However, the location that the Russian Navy selected did intersect with transatlantic telecommunications networks undersea and busy civilian aviation corridors overhead. As Dublin expelled four diplomats from the Russian Embassy in Ireland in condemnation of atrocities committed by Russia in Ukraine, it was also revealed that Moscow’s intelligence agents are covertly attempting to energize dissident paramilitaries in Northern Ireland. Viewed within the wider great power frame, this is subtle and low-cost subversion aimed at the UK, but with Ireland’s security simultaneously threatened. The same logic applies to the recent simulations broadcast on state-controlled Russian media depicting an undersea nuclear attack to wipe-out “the British Isles”. With hostility intensifying between Moscow and London, this threat is primarily targeted at the UK, and while unlikely to transpire in reality, this imagery is meant to foster insecurity to subvert a stronger Irish, UK and EU response to Russian aggression against Ukraine.

With the CoDF report recently published alongside the EU Strategic Compass (March 2022), there is an abundant availability of fresh recommendations to guide Ireland’s defence reform. With a primary focus on independent defence capacity, the CoDF report formulates three Levels of Ambition to assist Irish policymakers: LOA1 to continue with plans already specified in the 2015 White Paper on Defence; LOA2 stressing “enhanced capabilities” for improved fire-power and force protection; the establishment of a Joint Cyber Defence Command; and the installation of primary military and coastal radar. LOA3 proposes a significant upgrade on LOA2, with a blueprint for a “balanced” twelve-vessel navy; intercept-capable combat aircraft; and a “matured” command for cyber defence. The EU Strategic Compass offers larger frame initiatives that can assist Irish interests on transnational security concerns and/or to improve military strength.  EU plans for a Rapid Deployment Capacity of 5000 troops; regular live-fire land and maritime exercises; and an increased emphasis on military mobility, are all points on the Strategic Compass likely to develop DF capabilities for emerging security challenges, if the Irish government actively participates. This remains a big “if”, Ireland has so-far not been too active in other Common Security and Defence Policy (CSDP) initiatives, most notably Permanent and Structured Cooperation (PESCO) established in 2018.

Two-thirds of respondents to a recent national opinion poll favour a retention of Irish neutrality where Dublin formally abstains from military alliances, but Taoiseach Micheál Martin has still argued that neutrality will need to “evolve” to be effective for a worsening security situation. As European security becomes ever more uncertain, there is little time to waste in planning this “evolution”. The notion that Ireland is a “weak-link” in the wider European defence system has been raised repeatedly in the domestic media over recent years, but the contradictions inherent in Ireland’s neutrality as currently configured are now beginning to receive much wider international scrutiny. There has been considerable Irish media interest in Finland’s possible application for NATO membership, but recent interviews with prominent Finnish commentators – Finland’s Ambassador to Ireland; a former Prime Minister; and the current Permanent Secretary of Finland’s Ministry of Defence – on wider military non-alignment themes all highlight numerous and serious inconsistencies in Ireland’s defence policy that external observers have correctly pointed out.

A recent Irish Times editorial has argued that Ireland is “incompatible” with NATO owing to Dublin’s long-held nuclear disarmament aims. This “incompatibility” is debatable: for example, the Nordic states all have long histories in actively campaigning for nuclear disarmament initiatives, but three are founding members of NATO (Denmark, Iceland, and Norway), while another two (Finland and Sweden) are on the brink of joining the alliance. This claim is further jeopardized when NATO is correctly viewed as a Western liberal democratic alliance comprised of states that Ireland is perfectly “compatible” with when cooperating in other political and economic institutions. While Finland and Sweden are now seriously considering joining NATO, the path that both states have taken to improve their security outside the alliance over the last decade can still offer a blueprint for Ireland’s progression. In opinion polls, there has not been a majority in favour of NATO membership in Sweden and Finland until recent months, when this trend has resoundingly reversed. Even before this turnaround, little objection was heard in public opinion or from within either political system for policies that first strengthened independent defence capacity and then enhanced this further through cooperation in multiple non-alliance partnerships, either bilaterally between Helsinki and Stockholm; through Nordic Defence Cooperation (NORDEFCO); within the EU; or with NATO.

In Sweden, this approach has been termed “the Hultqvist Doctrine” (a reference to Minister of Defence Peter Hultqvist), while Matti Pesu argues that the similar partnership-based Finnish strategy “raises the threshold against aggression and creates prerequisites for providing and receiving political and military assistance”. Finland and Sweden anticipated the current deterioration in European security much earlier than Ireland did, and despite some politically sensitive issues over military non-alignment, domestic compromises were struck in both countries to optimally prioritize national security while keeping some room to manoeuvre with future alliance options. Unlike Finland and Sweden right now, NATO membership is still politically infeasible in Ireland; thus, an alternative partnership-based approach could be an astute option for Dublin to “evolve” its neutrality for the worsening security situation ahead.

Eoin Micheál McNamara is a visiting research fellow at the Finnish Institute of International Affairs (FIIA) in Helsinki.