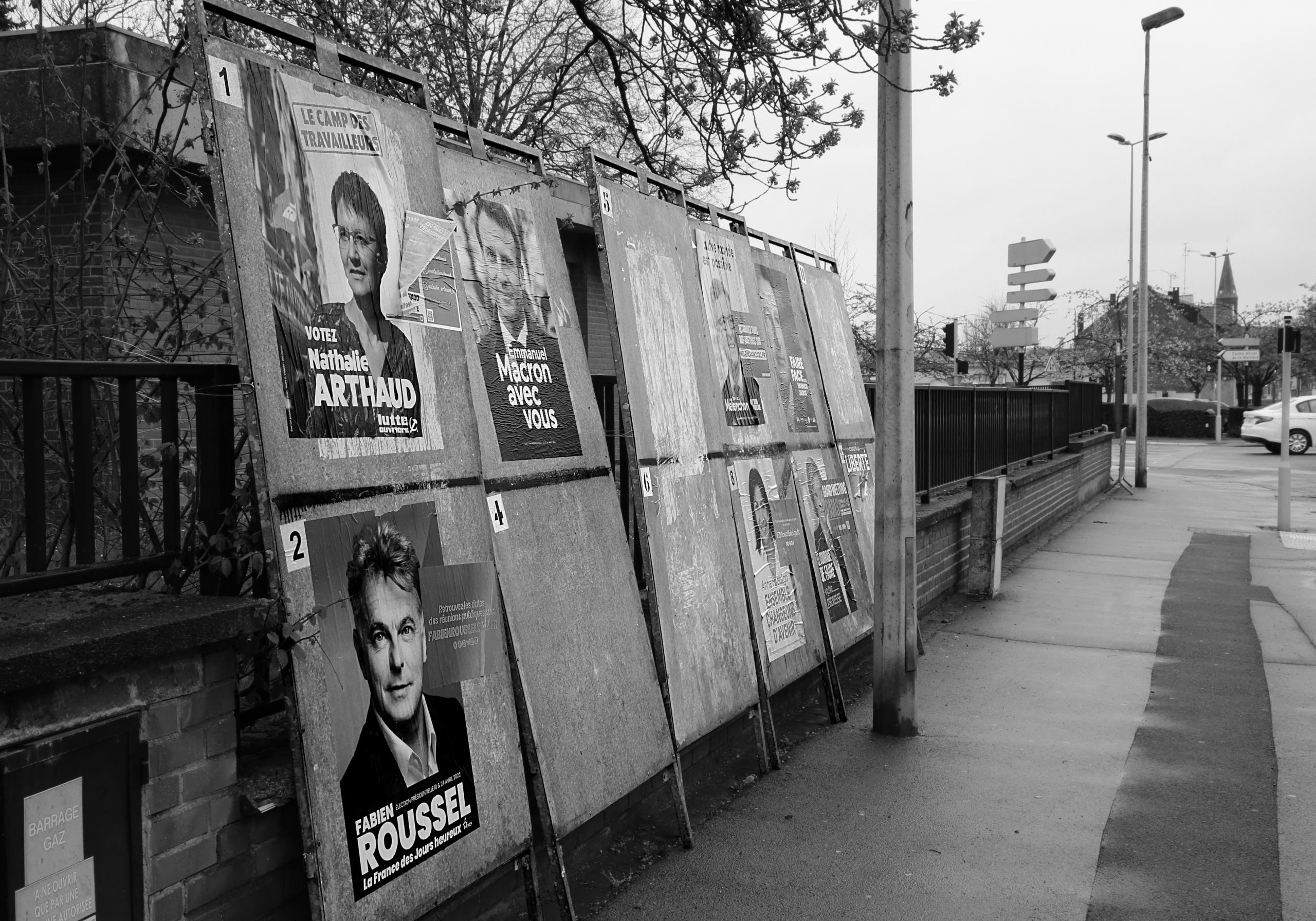 A Guide to the French Presidential Elections

Twelve candidates, representing the whole French political spectrum, are running for the presidential elections. The current President Macron is running for his re-election. If in 2017, he leaned more towards the centre-left, he now occupies the centre-right side with policy proposals such as an increase of the retirement age or the conditionality for basic income. The left is split between six candidates. Two candidates are centre-left: Yannick Jadot for Europe-Ecologie les Verts and Anne Hidalgo for the Parti Socialiste (the party of previous presidents François Mitterand and François Hollande). The other four candidates are far left: Jean Luc Mélenchon for La France Insoumise, Fabien Roussel for the Parti Communiste, Philippe Poutou for the Nouveau Parti Anti-Capitaliste and Nathalie Artaud for Lutte Ouvrière. The right side of the spectrum is represented by two candidates. Valérie Pécresse runs for Les Républicains (the Gaullist legacy party of former president Nicolas Sarkozy) and Jean Lassale for Résistons!. The far right is split between Marine le Pen (Rassemblement National), Éric Zemmour (Reconquête!) and Nicolas Dupon-Aignan (Debout la France!).

The presidential campaign never found its normal rhythm, having been disrupted first by the Covid crisis and then by the war in Ukraine. In addition, Macron postponed until the very last moment (early March) the announcement of his candidacy. He also refused to face the other candidates during the traditional pre-first round political debates. The political context and Macron’s strategy has created an odd climate around the presidential campaign, as if no one fully realises that the next five years of the country’s future are at stake on Sunday. A third factor for this climate could be the ever-present mistrust of much of the French population for its political elites, a mistrust that largely fuels the abstention from voting and a disaffection with French politics in general.

A similar disconnection is apparent when one looks at the main issues discussed during the campaign. Purchasing power became the central issue with the advent of the war in Ukraine. Every candidate promised measures to secure it, whether by increasing salaries, controlling prices, or lowering taxes.

No other issue managed to impose itself in the public discussion. Towards the end of last year, the far-right tried to impose the topic of immigration but it did not last long. The EU was barely discussed despite it being a clear marker of cleavage between the candidates (Macron, Jadot, Hidalgo for the pro-European camp and Le Pen, Zemmour, Mélenchon and Dupont-Aignan for the anti-European camp). The French presidency of the Council in the first half of 2022 should have imposed a certain dynamic around EU topics, but it was just overshadowed by the war.

Also surprising is the minor space dedicated to environmental policies in public debates despite their being the third largest concern for the French population according to many polls. The discussion barely went beyond the debate between pro- anti-nuclear power standpoints, and never tackled key issues such as biodiversity, energy planning or agricultural policies. Similarly, there was no proper debate on health reform, education, security or the reform of the judiciary.

The latest polls put Macron and Le Pen ahead for the first round but there are still some uncertainties about the vote. 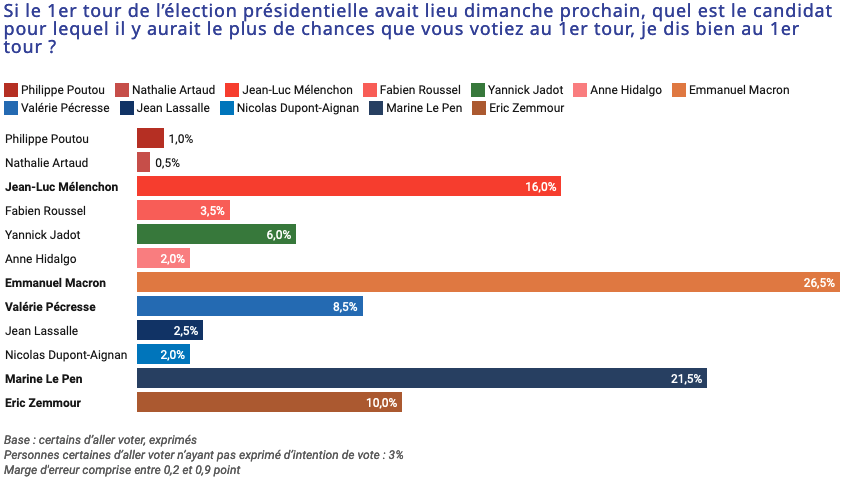 The first uncertainty concerns the dynamic of each candidate in the polls. While Macron has been leading for months now, he has lost around four points since February. Le Pen, on the contrary, clearly has positive momentum: she has gained 7 points since February and has left the other far right candidate more than 11 points behind. The third front runner, Mélenchon, has doubled his score since January. The results of Sunday could therefore be influenced by a vote utile (tactical voting) which could benefit each of these three front runners. Mélenchon could attract the votes of the leftist voters (mostly Jadot, Hidalgo and Roussel), Le Pen of the far-right ones (Zemmour and Dupon-Aignan) and Macron of the right (Pécresse). 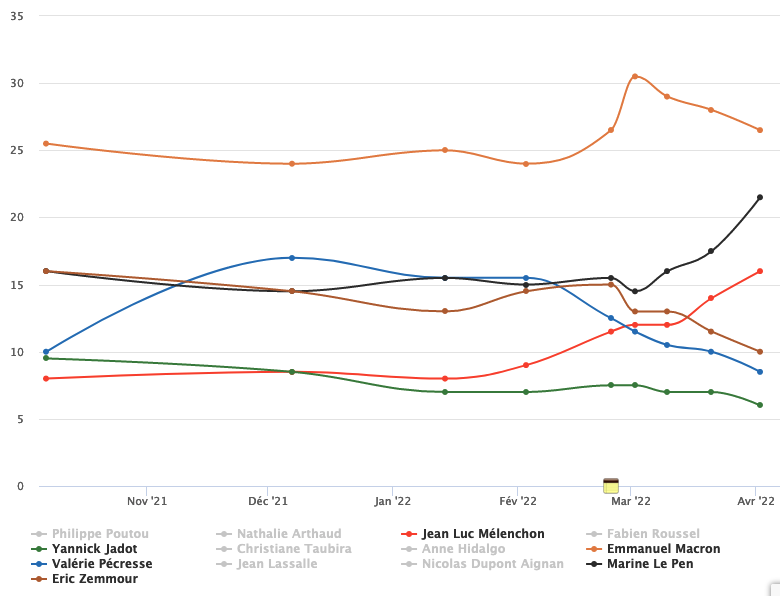 A second uncertainty is turn-out. This election could break a record of abstention since according to the latest polls, only 69% of the voters are certain to vote on Sunday. This number is distributed unequally among the population: only 55% of the 25-34-year-old are certain to vote and 60% of the workers and employees, as opposed to more than 81% of the retired voters. This could influence the result of the first round but also of the second round in case of a Macron-Le Pen duel. Macron’s core voters are proportionately older and more affluent whereas Le Pen’s core voters are proportionately younger and less affluent. 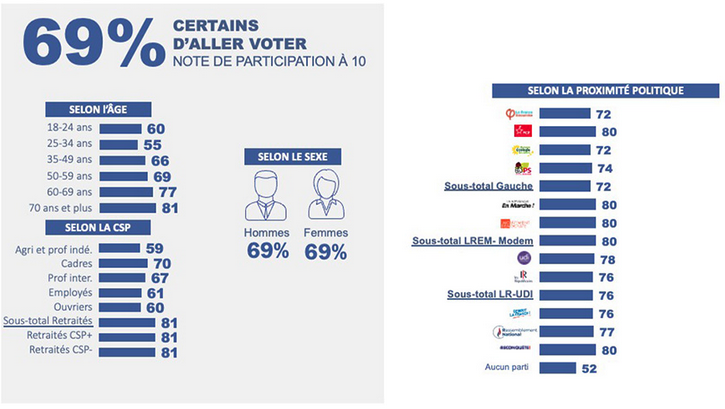