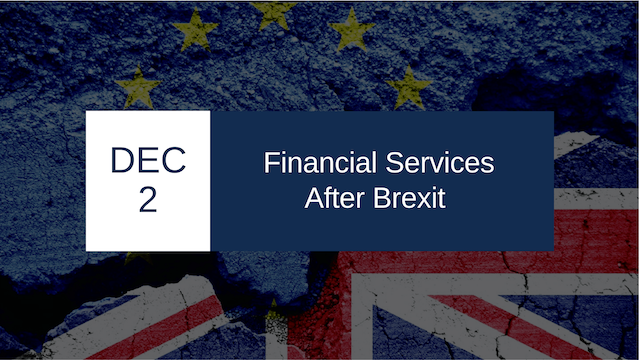 On Thursday 2 December 2021 the DCU Brexit Institute hosted an event on “Financial Services after Brexit”, aiming to explore how the withdrawal of the UK from the EU affects both the future of the city of London and the EU prospects for the development of a capital markets unions. This event was generously sponsored by Eversheds Sutherland.

The event was opened with an introduction by Federico Fabbrini (Professor of European Law, DCU, and Founding Director DCU Brexit Institute) and enriched by an Opening Keynote by Lord Jonathan Hill (former European Commissioner for Financial Stability, Financial Services and Capital Markets Union, and recently chairman of the UK Listing Review). Lord Hill pointed out that over time the UK will find itself diverging more and more from the body of European Law. He noted that the mood amongst City practitioners has been shifting gradually. Whereas immediately after the referendum people were asking “How are we going to get equivalence?” or “How do we stay close to the EU?”; now the predominant conversation is on “How do we identify new opportunities?” and “How do we make ourselves more competitive at the global level?”. Concluding his statement, Lord Hill said that in the same way Europe is thinking less about the UK, financial services in the UK are starting to think less about Europe and more about the global marketplace.

The keynote was followed by a high-level roundtable moderated by John Peet (Editor at The Economist). The first speaker was Christy Ann Petit (Assistant Professor of EU Banking Law, DCU), who began by saying that, since the start of this year, UK financial institutions have lost their passport to provide financial services in the EU. Therefore, now they can rely only on a very limited set of equivalence decisions to access the EU single market. Subsequently, she stressed that, due to these concerns, some people have observed that we are in a hard Brexit situation as concerns banking and financial services. She focused on three points: equivalence, regulatory divergence and cross-border cooperation in financial services.

Her remarks were followed by those of Valerio Scollo (Partner at GSK Stockmann Luxembourg). He started by quoting Frans Timmermans (European Commission Executive Vice-President for the European Green Deal): “From a global perspective the EU has two kinds of Member States, small ones and those who do not know yet that they are small”. He reflected that this theory applies to each Member State, as well as the UK. He went on to say that the capacity of the EU to pull assets has been damaged by Brexit, as a large part of the capital is sitting in the UK. On the other hand, the UK is suffering from the transfer of several players. He highlighted that this did not happen immediately as it was expected, however, it is happening now, and it is likely to continue.

The round-table continued with Tom Hall (Manager at AIB). He pointed out that the UK regulator has upped the ante across the boarder for third countries operators in the UK. However, it is minimal in terms of extra lift as long as they enjoy a relationship with home state regulators and they are happy to take their information from them and use it as an entry point for information.

The final speaker was Deborah Hutton (Partner at Eversheds Sutherlands) who stressed the fact that there is a real human element in the Brexit process, particularly when we look at people losing their jobs, the costs and management of it. Hence,  it cannot be emphasized enough that an agreement must be found between the leadership of the EU and the UK.