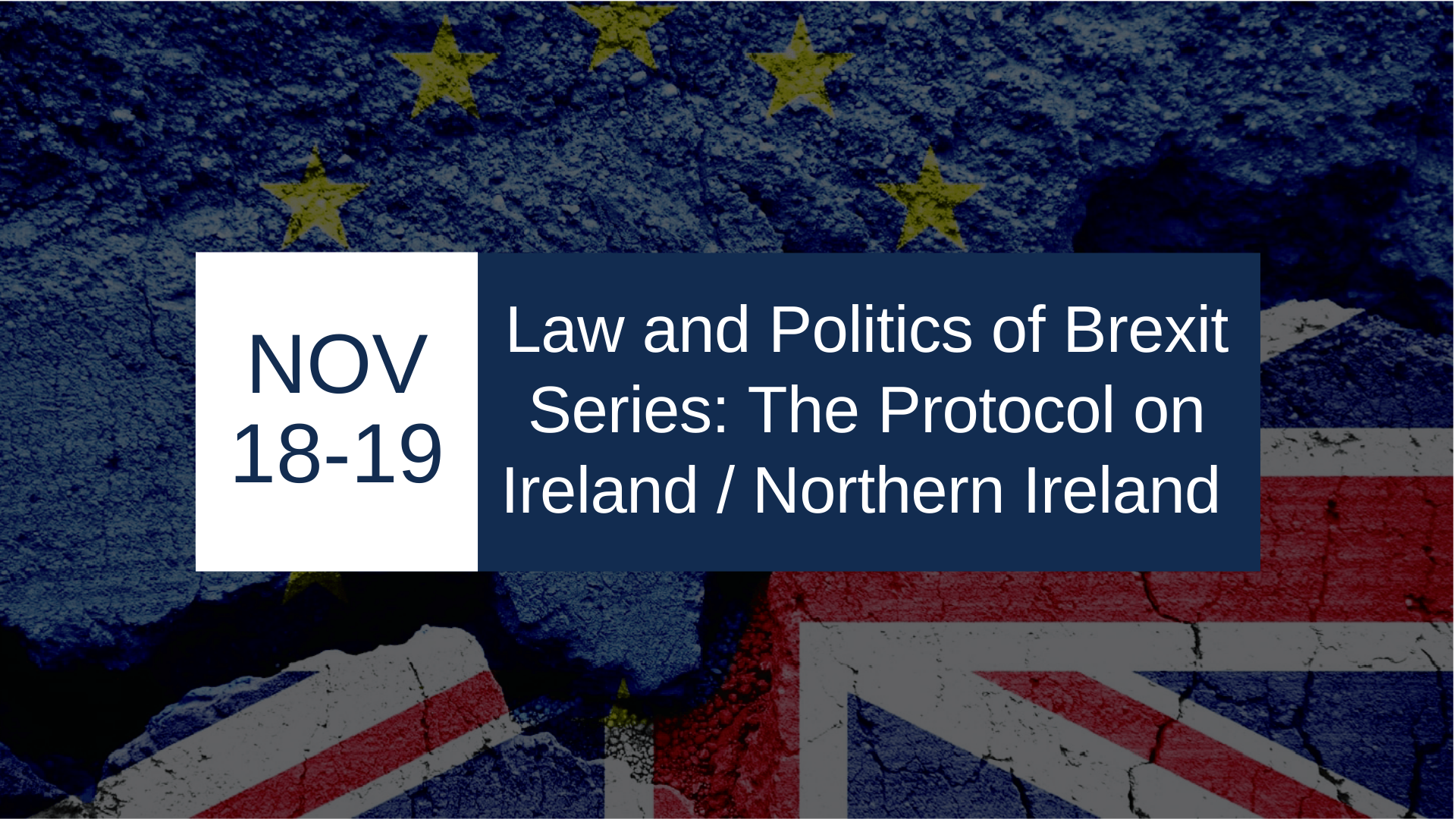 The conference included a keynote by Maroš Šefčovič, Vice-President of the European Commission for Interinstitutional Relations and Chief Brexit Negotiator, and featured an opening statement by Simon Coveney TD, Minister of Foreign Affairs of Ireland. Minister Coveney emphasised the critical nature of the Northern Ireland Protocol for Ireland’s future, remarking that the goal of the EU-UK engagement must be to ensure an outcome that is in the best interest for people of Northern Ireland.

Panel 1 on The Context of The Protocol on Ireland / Northern Ireland was chaired by Derek Hand (Dean of the DCU Faculty of Humanities and Social Sciences) and involved a presentation on ‘Fractured Unions: Brexit and the Territorial Constitution’ by Michael Keating (Aberdeen). First, Professor Keating shared his view of the UK as a plurinational union in which the question of sovereignty has never been settled, rather than a unitary state. In this regard he added that it makes little difference whether centrifugal forces or centripetal tendencies prevail after Brexit: the real issue is the existence and nature of borders in a world marked by shared sovereignty, and not where they are located. The second speaker, Katy Hayward (QUB) offered an interesting presentation on ‘Northern Ireland: Demographics & divisions’. She explored the evolution of social and political identity in response to the changing political context in Northern Ireland.  Looking in particular at political community identity and the degree to which there are differences and divisions between community groups in Northern Ireland, Professor Hayward showed that division between unionist and nationalist has been reinforced since Brexit and the full enforcement of the of The Protocol on Ireland / Northern Ireland.  Lastly, Oran Doyle (TCD) offered an interesting perspective on ‘Ireland: Developments & debates’ by exploring the issues arising for Ireland from UK exit from the EU. He examined if and how Irish unification might occur, the issues that unification would raise, and finally he outlined what sort of Member State Ireland would be if unification should happened.

The discussion was enriched by the intervention of the Former Taoiseach Bertie Ahern which pointed out the two issues affecting the Protocol. On the one hand there is the question of trade, on the other hand, which ‘is far more difficult to solve’ the fact that people in NI see the Protocol as identity, as ‘a road to the Dublin government to take over again’.

Panel 2 on Human Rights and Cross-Border Cooperation Provisions was chaired by Christian Kaunert (DCU) and involved a presentation by Imelda Maher (UCD) on ‘Common Travel Area (CTA)’. She stresses that the provisions of the CTA go much further than simply unimpeded border crossing as they cover an array of social and political rights for British and Irish citizens. However, while its continuation is fairly certain irrespective of what happens in relation to the Ireland and Northern Ireland Protocol, the fragmented and legally diverse nature of such an agreement makes it a creature of political and administrative expediency, giving no legal certainty should the current strong political support fade away. The second speaker, Rory O’Connell (UU), delivered a presentation on ‘North-South Cooperation’ by exploring the historical framework, briefly looking at the history since 1921 to date. Focusing on the Belfast / Good Friday Agreement and on The Northern Ireland Protocol, he shares his optimistic vision about the scope of cooperation and cross border dialogue between the North and South of Ireland, also thanks to the different initiatives of the Irish government such as the Ireland initiative to look at supporting cross border civil society dialogue. The last panellists of the day, Aoife O’Donoghue (Durham) gave a presentation on ‘Non-Discrimination: Article 2 in Context’. In her analysis, Professor O’Donoghue pointed out that the UK is for the first time in forty years going about trade negotiations on its own, and the necessity of maintaining non-diminution of rights and reciprocity of rights on the island of Ireland will likely impact on the UK’s future trade negotiations. She emphasised that Article 2 of the Protocol now joins the 1998 Belfast Good Friday Agreement (1998 Agreement hereafter) in becoming a key fulcrum of legal debate on human rights in Northern Ireland.

The second day of the event was opened by Professor Daire Keogh (DCU President) and followed by the keynote of Maroš Šefčovič, Vice-President of the European Commission for Interinstitutional Relations and Chief Brexit Negotiator. He started by stressing the importance to have a forum for debate, such as the Brexit Institute, where all the sides can meet and discuss Brexit from both academic and policy perspectives at the same time. He also highlighted that, when negotiating the Protocol on Ireland / Northern Ireland with the UK, the commitment of the European Union was (and still is) to establish stability and prosperity for the people of Ireland / Northern Ireland.

The event continued with Panel 3 moderated by Christy Ann Petit (DCU) on the Economic Provisions of the Protocol on Ireland / Northern Ireland. The first panellist, Catherine Barnard (Cambridge) gave an interesting presentation on ‘Internal Market’. She underlined the constitutional, political and trade consequences of Article 6 of the Protocol on Ireland / Northern Ireland. In her view, the constitutional sleight of hand, seen particularly in Article 6 of the Protocol, obfuscates the trade reality on the ground, and the talk of ‘unfettered market access for goods’ servs to rub salt into political wounds when ‘unfettered’ it is not. Afterwards, Niall Moran (DCU) took the floor with a presentation on ‘Customs and Movement of Goods’,  where  he focused on Article 5 of the Protocol on Ireland / Northern Ireland. He pointed out that Northern Ireland is de jure in the UK’s custom territory, however it is the EU customs legislation that applies de facto. Afterwards, Graham Butler (Aarhus) delivered a presentation on ‘Regulation and State Aid’. At first, he gave a general overview of EU State Aid law. Subsequently he highlighted that the provisions of EU law listed in Annex 5 should apply to the UK in respect of measures that would affect trade between Northern Ireland and the Union. However, the potential reach of Article 10 applies to Great Britain as much as it does in Northern Ireland.

The conference concluded with Panel 4 chaired by Sharon O’Brien (DCU) on Governance Provisions and started with a presentation by Joris Larik (Leiden) on ‘Supervision and Dispute Resolution’. He argued that due to fundamentally different views and strategies of the EU institutions and the UK government, the design and use of the Protocol’s mechanisms have the potential to exacerbate rather than mend EU-UK relations. The second speaker, Robert Howse (NYU) gave a presentation on ‘Safeguards’. He described how, in political rhetoric surrounding the implementation of the Ireland/Northern Ireland Protocol, it has been suggested, that ‘triggering’ Article 16 is the ultimate response to dissatisfaction with the operation of the Protocol. In his presentation, Professor Howse explained that, given the uncertainty and complexity surrounding the interpretation of Article 16, its invocation is a high-risk strategy, both legally and politically. Finally, Brendan O’Leary (Pennsylvania) delivered a presentation on ‘Consent’. He started his presentation by saying that treaty-breaking, threatening to break treaties, and making treaties insincerely, are not novel British activities peculiar to Lord Frost, Brandon Lewis and Boris Johnson. Hence, he defined the attitude of the UK as a lie. In particular, he sees three lies: ‘Lie 1: Perfidy in Making the Protocol’, ‘Lie 2: Seeking a hard border while pretending otherwise’, ‘Lie 3: The biggest lie: abusing consent’.