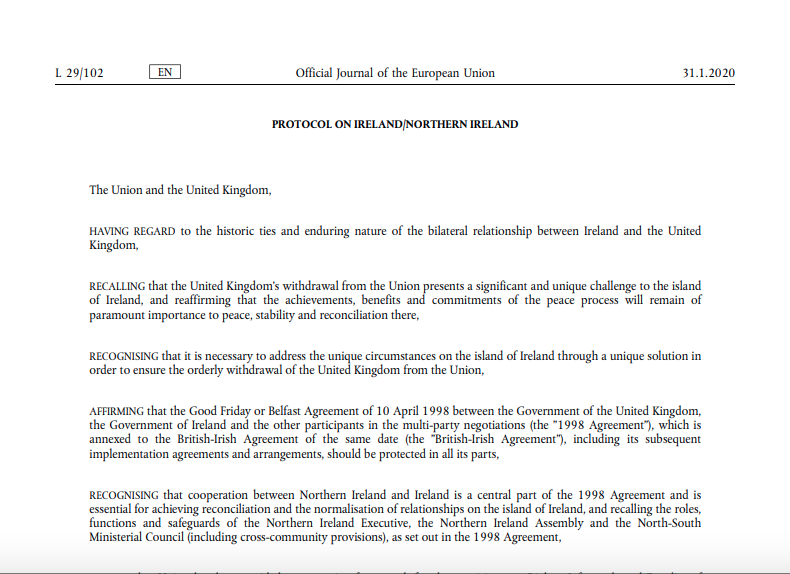 As COP26 wraps up in Glasgow, the UK government may turn its attention from the global stage back to a thorny issue close to home. As its disagreements with the EU over the Northern Ireland Protocol remaining unresolved, the coming weeks will show whether the EU and UK will further harden their stances, possibly resorting to more drastic measures. These include triggering Article 16 safeguards, taking the UK to the Court of Justice of the EU (earlier proceedings had been paused in July), moves which could even escalate into a full-blown trade war with ripple effects across Europe.

Such possibilities are explicitly provided for in the Protocol, revealing its dual character as a strong holdout of EU law still applying to part of the UK and, at the same time, part of a system of dispute settlement under public international law. This makes understanding the governance and dispute settlement mechanisms of the Protocol and of the interlinked post-Brexit agreements all the more important.

What could that mean in practice? Suppose you want to buy some Stilton cheese or Scotch whisky for the holidays and all of a sudden these have become a lot more expensive. While you thought you were just doing some shopping, you ended up in the crossfire of an actual post-Brexit trade war. You will have become part, albeit inadvertently, of efforts to protect the EU’s internal market and the peace process in Northern Ireland. That’s at least what you can tell friends and family when you have to explain why you did not buy that expensive cheese and whisky in the end.

The UK has been out of the EU for over a year and a half. Brexit was supposedly “done”. But the EU is still arguing with its former member state, especially when it comes to the Northern Ireland Protocol. The ink was barely dry under the new agreements that now regulate EU-UK relations when the European Commission accused the UK of violating them, and the UK is already urging to change them.

The situation remains tense, despite the EU’s recent concessions. The EU had indicated that it would agree to a significant reduction of checks taking place between Northern Ireland and the rest of the UK. These checks “in the Irish Sea” are necessary to avoid checks between Northern Ireland and the Republic of Ireland and thus to avoid a hard border across the island, which was one of the priorities on which both sides agreed in the negotiations. However, what the EU would not compromise on was the continued role of the Court of Justice of the EU under the Protocol, which is one of the main points of contention for the UK government. An escalation of the dispute in the coming weeks is thus deemed a realistic scenario.

The possibility of escalation is enshrined in the post-Brexit agreements in the following way: In some cases (and with various exceptions), failure to comply with obligations under one agreement, including the Northern Ireland Protocol, may lead to the suspension of obligations under another. The latter concerns in particular the Trade and Cooperation Agreement, which has been in force since 1 May 2021 and which, among other things, regulates reciprocal market access.

A common tool for enforcing compliance with international obligations is the imposition of trade restrictions, often in the form of import tariffs. For the EU, import tariffs are one of the sharpest weapons in its arsenal in relations with third countries, of which the UK is now one. Just earlier this month, the EU and United States ended a long standoff over steel and aluminium, which had seen each side imposing tariffs worth billions of euros on the other. In past disputes, the EU also targeted “iconic” and politically sensitive products such as Harley Davidson motorcycles, Levi’s jeans and Bourbon whiskey.

By restricting access to the large EU market, external partners are “encouraged” to respect the mutually agreed rules. However, import tariffs that the EU may impose on the UK are also painful for companies and consumers in the EU because they have to be paid by importers. For example, this had to be explained several times in recent years to previous U.S. President Trump, who believed that import tariffs would be a good source of income for the US. The extra costs caused by this are usually passed on to consumers, who then face higher prices. Hence, there is a chance a strategy focussed on driving up the economic costs of non-compliance will backfire by pitting EU importers and consumers against the EU and seemingly vindicating Brexiteers accusing the EU of “bullying” and “punishing” the UK.

The official purpose of the post-Brexit agreements was to usher in a new, stable, and friendly relationship between the EU and the UK. Businesses and citizens would have certainty. Northern Ireland should even be allowed to “have its cake and eat it”: staying within the EU’s single market for goods and benefiting from new trade agreements that “Global Britain” would strike with countries around the world. Now the Northern Irish are stuck between a rock and a hard place, and all of us as can be potential victims of a trade war.

This blog post summarises some core points from the author’s working paper on governance and dispute settlement under the Northern Ireland Protocol. It also draws on an earlier op-ed by the author published in Dutch newspaper Het Parool.

Joris Larik will be a speaker at the DCU Brexit Institute’s Book Conference on the Northern Ireland Protocol on November 18-19.