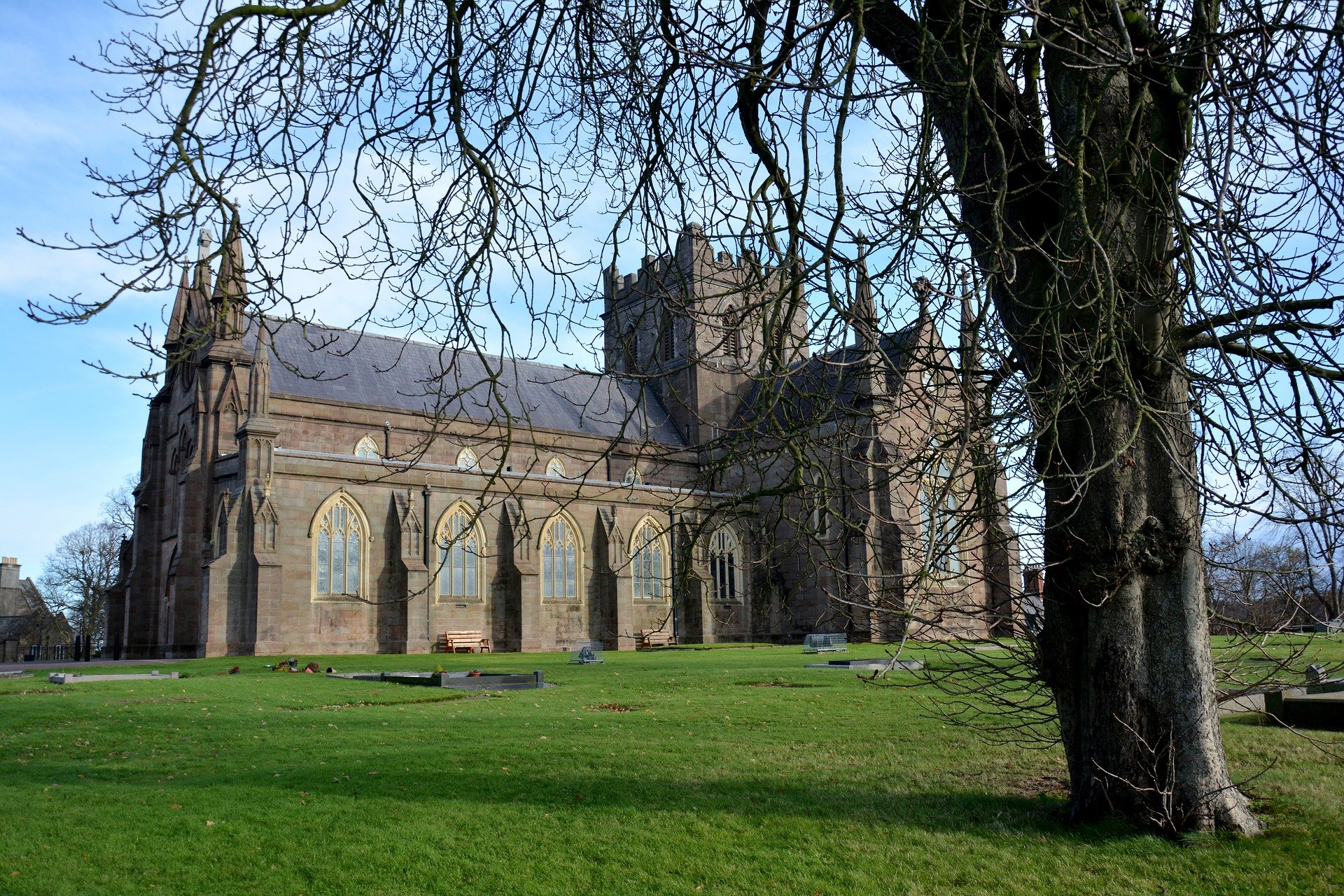 Partition and the Protocol: Commemoration and Reconciliation in Northern Ireland in Light of Brexit

Over several days in mid- to late-September 2021, the news cycle in Ireland was dominated by coverage of President Michael D. Higgins’ decision that he would not attend a commemorative church service, to be held in Armagh on 21 October. Several weeks later, the story continues to rumble on. The event in question was jointly organised by the Church Leaders’ Group – an umbrella group comprising the heads of the the largest Christian Churches in Ireland – to “mark the centenaries of the partition of Ireland and the formation of Northern Ireland”. It was intended that Queen Elizabeth II would also attend, and it was billed as a “Service of Reflection and Hope”.

Higgins claimed that the title of the event marked it as unsuitably political for him to attend (though this was not precisely explained), and he also claimed (falsely) that the Church Leaders’ invite had incorrectly addressed him as ‘President of the Republic of Ireland’ rather than as ‘President of Ireland’ – a point he later clarified.

Critics of the President’s decision not to participate in the commemoration made a number of arguments, including that it represented a snub to the Queen, and, incorrectly, that it transgressed the constitutionality of his office. There were questions raised as to how this row had been allowed to spill into the public domain, rather than being conducted backstage via the usually discreet diplomatic channels. The most important and enduring criticism was that in disrespecting the Unionist tradition in Northern Ireland, the President’s non-attendance at the commemoration represented a setback for ‘reconciliation’. That the President was supported in his decision by a majority of Irish citizens gave rise to a certain amount of pearl-clutching, and claims that “all of the fine talk about respecting the British identity of the unionist population in a future united Ireland appeared to go out the window”.

For what it’s worth, I have no particularly strong view one way or the other as to whether the President was right to decline the invitation of the Church Leaders’ Group. I am clear, however, that no commemoration of partition can ever be neutral or non-political, let alone reconciliatory. The Church Leaders’ defence of their event has been wilfully naïve in this regard. Laura McAtackney has forcefully demonstrated how commemoration, in general, and of events as essentially contested as the partition of Ireland, in particular, are necessarily divisive. This having been said, had Higgins decided to attend, I suspect the enduring political impact would have been pretty minimal, providing fodder for a couple of days’ worth of newspaper columns before receding from both the headlines and public memory. This is likely what will happen now that it has been announced that Foreign Minister, Simon Coveney, and Minister of State, Jack Chambers, have been delegated to attend.

It is notable that the centenary of Northern Ireland has so far been generally low-key. There’s been very little by way of public ceremony since the somewhat farcical launch of the Northern Ireland Office’s official centenary programme, ‘Our Story in the Making’, in December 2020, as described in full cringe-inducing detail by Sarah Creighton. Part of this is owed, of course, to Covid. Sam McBride is right to note that this centenary has been largely invisible. I disagree with him, however, that it could ever have been an effective vehicle for reconciliation, which is not, at any rate, an unproblematic concept. Indeed, over the past decade, huge amounts of capital (social, cultural, political and economic) have been invested in ‘commemoration as reconciliation’. But it hasn’t worked. In 2021, relationships within and between Ireland and Great Britain have perhaps never been more unreconciled. The power of commemoration to reduce and resolve conflict in Ireland is vastly overstated.

The much-vaunted model for reconciliatory commemoration during this ‘Decade of Centenaries’ has been the Queen’s state visit to Ireland in 2011, during which she laid a wreath at Dublin’s Garden of Remembrance, and opened a speech at a state banquet in Irish. The visit was and remains widely lauded in Ireland, but it has had no enduring impact at all in Britain. This, in itself, calls in to question its efficacy in promoting ‘reconciliation’. As Feargal Cochrane so appositely puts it:

“It is fair to say that all the pomp and circumstance, fancy state dinners, nicely posed photographs and mutual backslapping between the British and Irish political elites were purely symbolic…Ultimately, whether the Queen speaks in Irish or not changes nobody’s lived experience”.

The Queen’s state visit symbolised something that was already true. It did not create a new, more ‘reconciled’ reality. By 2011, after decades of close collaboration in and over Northern Ireland, and as joint members of the European Union both led at that time by centre-right governments, the UK and Ireland had very little left to fight about.

As has been well-documented, the Brexit referendum in 2016 fundamentally up-ended this, (re)opening what Brigid Laffan has termed Ireland’s ‘English Question’. The shape that Brexit has taken, the anti-Irish sentiment it has dredged up, and, throughout, the disregard for the island of Ireland demonstrated in the corridors of Whitehall and Westminster, provides living proof of just how little impact the Queen’s visit to Ireland in 2011 (or, for that matter, the return visit of Michael D. Higgins in 2014 and the wider ‘Decade of Centenaries’) had on British political culture. Understanding and institutional memory of the Irish peace process is sorely lacking among the British political class. And poorly institutionalised bilateral relationships – based ultimately on personal friendships between officials – have proven themselves unequal to the task of addressing Brexit as a new vector for Anglo-Irish conflict.

The bad faith which has so far defined the UK government’s approach to implementation of the Protocol on Ireland/Northern Ireland has done little to restore trust or aid conciliation. As a consequence of how subsequent British governments have approached Brexit, post-Brexit British-Irish relations are unstable and profoundly un-reconciled. And this is all exacerbated by wider processes of constitutional upheaval, most obviously in Scotland, but also in England and Wales. In Northern Ireland, the question of the Irish border – on which Unionists and Nationalists are definitionally unreconcilable – has been given an impetus and urgency by Brexit which it simply did not have in 2011.

Prominent Unionist actors who have claimed that Higgins’ non-attendance at the Armagh church service will ‘make it difficult’ to build a shared future in Northern Ireland have themselves been refusing to participate in key cross-border governance structures, such as the North-South Ministerial Council, a refusal which has recently been ruled unlawful. They have threatened to pull these structures down entirely if their demand to ‘free’ Northern Ireland from the Protocol is not met. This is a far more serious political threat than is represented by the President’s declined invitation.

Critically, absent any change in the wider political mood music – and particularly in the UK government’s approach on the Protocol – no amount of joint British-Irish commemorative ritual can repair the political damage that Brexit has wrought to relationships across ‘these islands’. To borrow from the title of Lea David’s excellent book, the past can’t heal us. Perhaps, as Brian Hanley has put it, the President’s non-attendance at the service in Armagh will lead to a more “honest debate about the uses of history and why it cannot really be a tool for reconciliation”. ‘Ethical remembering’ of a ‘shared’ past – itself a highly and contentiously political undertaking – is not and has never been a remedy for divisions that are rooted in (and indeed, are the very stuff of) contemporary politics.

Jonathan Evershed is the Newman Fellow in Constitutional Futures in the Institute for British-Irish Studies (IBIS) and School of Politics and International Relations (SPIRe) at University College Dublin.