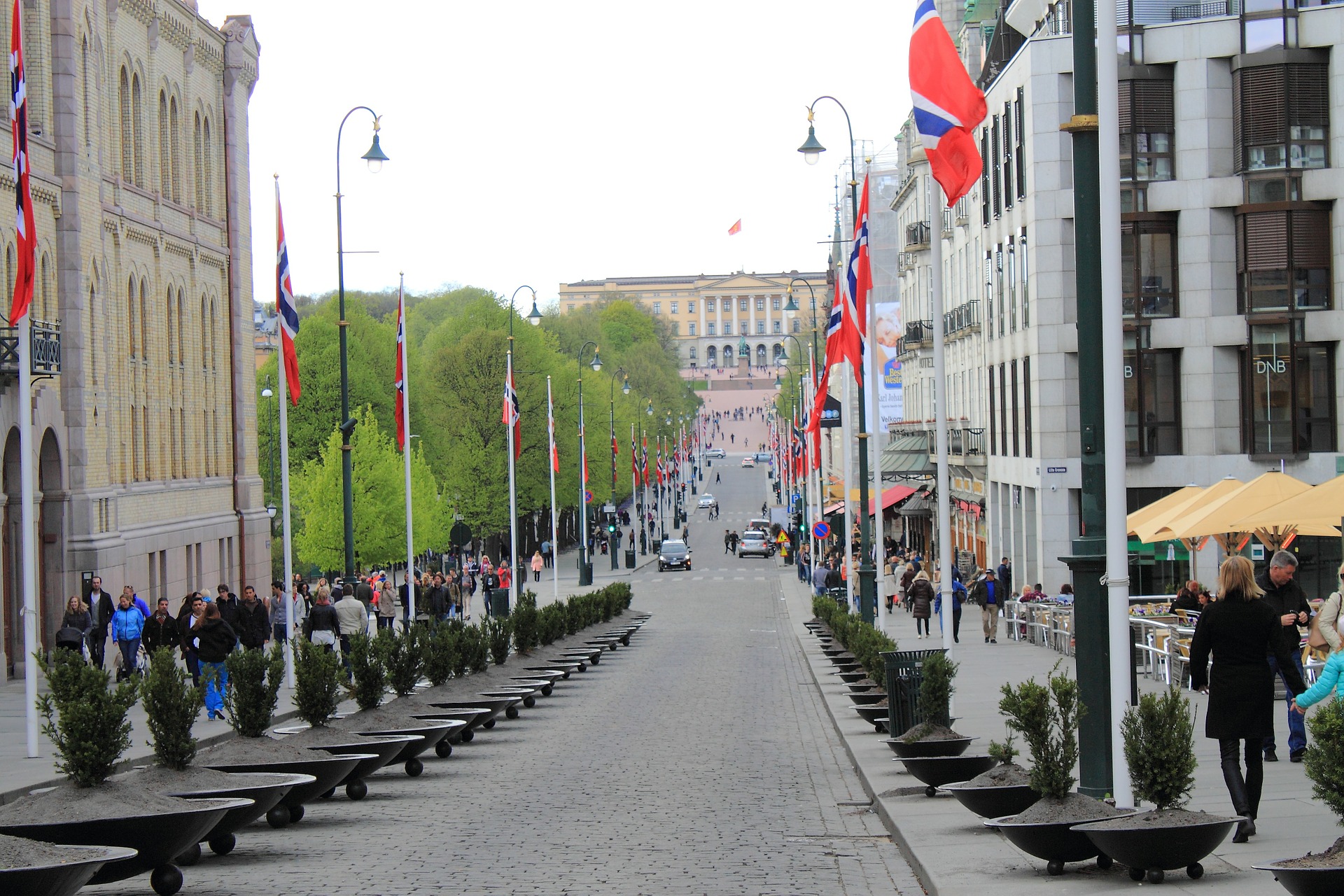 If we look at the overall pattern of change for the party system, the most obvious conclusion is that the main result was political fragmentation. Both of the two largest parties lost seats. Labour (AP) lost 1 seat, whereas the Conservatives (Høyre) lost 9 seats.

The main issues that marked the election campaign were domestic, and there was very little focus on foreign policy. There were glimpses of attention to Norway’s relationship to the EU, the main issue being whether the expected change in government would lead to changes in Norway’s EU affiliation, given that the Centre Party is a deeply Eurosceptic party. The early stages of the election campaign were marked by a ‘revolt of the periphery’, which was not only directed against Oslo the capital but also other cities and gave a major boost in support to the Centre Party as a rurally based agrarian party. The Centre Party could draw on popular opposition to a regional reform which had amalgamated regions and created the region Viken (which geographically speaking is a very awkward construct, stretching way Northwards from the Southern Eastern border with Sweden). A similar upset was seen in the North, where the two Northernmost regions had been amalgamated against the majority’s will in Finnmark (there was a popular referendum in Finnmark where the no side won by a clear margin). There was also opposition to the closure of local police stations and hospitals.

With the revolt of the periphery as a major impetus, in early January 2021 it looked like the Centre Party could overtake Labour in the polls, and the Centre Party leader Trygve Slagsvold Vedum declared himself as a Prime Minister candidate. Thus, there were three Prime Minister candidates going into the final stages of the election campaign: Erna Solberg (incumbent, Conservative); Jonas Gahr Støre (Labour); and Trygve Slagsvold Vedum (Centre Party). As the election campaign unfolded, the centre-periphery and urban-rural conflict subsided somewhat whilst inequality and green transition entered centre stage. All parties to the left spoke against the rising socio-economic inequality, and the Centre Party linked that to a claim to rural-urban inequality. There are thus competing accounts as to the forms of inequality that should be addressed among the centre-left parties, and Labour is torn between socio-economic inequality in terms of class and socio-economic inequality in terms of regional location. The green transition issue gave the Greens (MDG) a boost in the polls, but in the election, it fell just short of the four percent threshold and therefore only obtained 3 seats. The other main environmental advocates, the Liberal Party (Venstre, which was part of the governing coalition) managed to hold onto its 8 seats. The Socialist Left Party (SV), which both spoke up against socio-economic inequality and the need for a green transition gained 2 seats and ended up with 13 seats. Labour is somewhat divided on how committed to the green transition it should be, and the Centre Party for a while even prevaricated over whether it thought that Norway should be committed to the Paris Agreement, although it came down in support of it eventually. Conversely the Progress Party has long been a Petro-Populist Party and is a staunch supporter of the oil industry.

It is difficult to attribute the result – the government’s loss of seats – to the COVID-19 pandemic. Norway’s fatality numbers during the COVID-19 period were lower than in a regular influenza year, and the Norwegian government has launched a range of policy programs to buffer people from the pandemic. The negative effects have been far from equally distributed, but it is difficult to attribute the responsibility squarely to the coalition government which as a minority government has depended on parliamentary support from the opposition parties that at times have dictated government policy.

A change in government

The election result paved the way for a change in government. Labour as the largest party held talks with the incoming Prime Minister Støre’s preferred coalition partners, the Centre Party, and the Socialist Left Party. The Socialist Left Party pulled out of the talks before the serious negotiations started. Thus, the new government has ended up as a minority coalition between Labour and the Centre Party, with a total of 76 seats (out of 169). Had they managed to persuade the Socialist Left they would have had a total of 89 seats and a majority in the Storting, the Norwegian parliament. The two governing parties signed a governing agreement, dubbed Hurdalserklæringen (from the place where it was negotiated). This 86-page declaration lists the government’s objectives, in considerable detail.

In the following, I will only focus on what the government declaration says about Norway’s EU affiliation. The declaration explicitly states that

“(t)he government will develop and deepen Nordic cooperation in a wide range of areas. Nordic and European countries are Norway’s most important political and economic partners. The government will stand up clearly for the value of an open and cooperative Europe at a time when authoritarian forces, nationalism and xenophobia are on the rise. The EEA Agreement will form the basis for Norway’s relationship to Europe. The government will work more actively to promote Norwegian interests within the framework of the agreement, and the wiggle-room in the agreement will be used with particular emphasis on ensuring national control in such areas as labour relations, energy and rail traffic.” (author’s translation)

This statement is an amalgam of the two coalition parties’ statements on Europe. The Centre Party underlines the Nordic dimension, whereas Labour places more direct emphasis on Europe. The sentence to the effect that “(t)he government will stand up …” is taken verbatim from the Labour Party’s program for the period 2021-2025.

With regard to Norway’s relations with the EU, the new government thus reiterates the ‘gag rules’ that each government has instituted to maintain the status quo of Norway’s EU affiliation pretty much since the EEA agreement entered into force in 1994. The gag rules are meant to keep a lid on the EU membership issue. The governing coalition thus binds itself to govern on the basis of the present EEA affiliation. It is then also stated in the coalition government declaration that “the EEA Agreement shall form the basis for Norway’s relationship to Europe.”(Author’s translation). The tacit understanding is that if one party actively starts working towards changing the status quo the coalition will unravel. The present governing configuration therefore falls into an established pattern of governing coalitions ‘freezing’ the status quo. The new coalition government consists of one broadly speaking pro-EU party, Labour, that sees itself as a guarantor of the EEA Agreement (while declaring in its party program that it is internally divided on the issue of EU membership) and one very Eurosceptic party, the Centre Party, that is against the EEA Agreement. In its party program it states that it wants to examine alternatives to the EEA Agreement that strengthen Norwegian sovereignty and ensure access to the EU’s internal market for Norwegian exports.

The political arithmetic explains why despite a new election and a change in government, there is likely to be no change in Norway’s EU affiliation:  the continued presence of gag rules prevents a change in the status quo. In today’s Storting, the parties that support the status quo would have 98 out of 169 seats (down from 111 in the previous Storting). Some parties are divided in both directions, so how firm this specific number is can be questioned. The main point however is that the Eurosceptic parties do not have a basis for renegotiating Norway’s current EU affiliation. Some minor concessions have been granted to the Eurosceptics in that there is a commitment to “carry out an assessment of the experiences of the EEA cooperation during the last 10 years. In that connection the experiences that proximate countries outside the EU have with regard to their EU agreements will be examined.”(author’s translation) The Centre Party wants Norway to reject the EU’s fourth railway package. The government platform states that it will “as soon as possible enter into a dialogue with the EU with the goal of ensuring Norway exceptions from portions of the EU’s fourth railway package.”

Incidentally, this focus on specific issues or policy measures is entirely in line with the logic of gag rules which ensures that specific concerns can be dislocated from the constitutionally salient EU membership issue. I have argued elsewhere that the gag rules facilitate further integration by taking attention away from the question of Norway’s EU affiliation and instead focusing on specific issues such as the EU’s third postal directive, which generated a lot of controversy. Whether the railway initiative falls into that pattern is too early to tell. The statement in the government declaration is fairly open: It could mean that the government wants to initiate a process where Norway gets some sort of opt-out, in which case it will be interesting to see if the EU is willing to grant any such concessions to a non-member. Or the statement could mean that the government approaches the EU and finds that there is no real leverage to alter the regulations. What then will be done is not clear from the new government’s platform.

The new minority coalition government has pledged to cooperate with the parties to the left. This illustrates the squeeze that Labour finds itself in: between a strengthened Centre Party to its right side and a strengthened left flank with the Left Socialists and Red. This can be quite a precarious position, with the prospect of hemorrhaging voters either to the right or to the left, depending where it sets its foot. The Labour party has clearly ended in a spot which requires a fine-tuned balancing of issues and concerns. To what extent European issues will be entered into such a process of balancing is not entirely clear. This government appears more willing to discuss EU-related issues than the previous one. Nevertheless, the government platform would seem to indicate that the overarching question of Norway’s EU affiliation appears to be locked in.