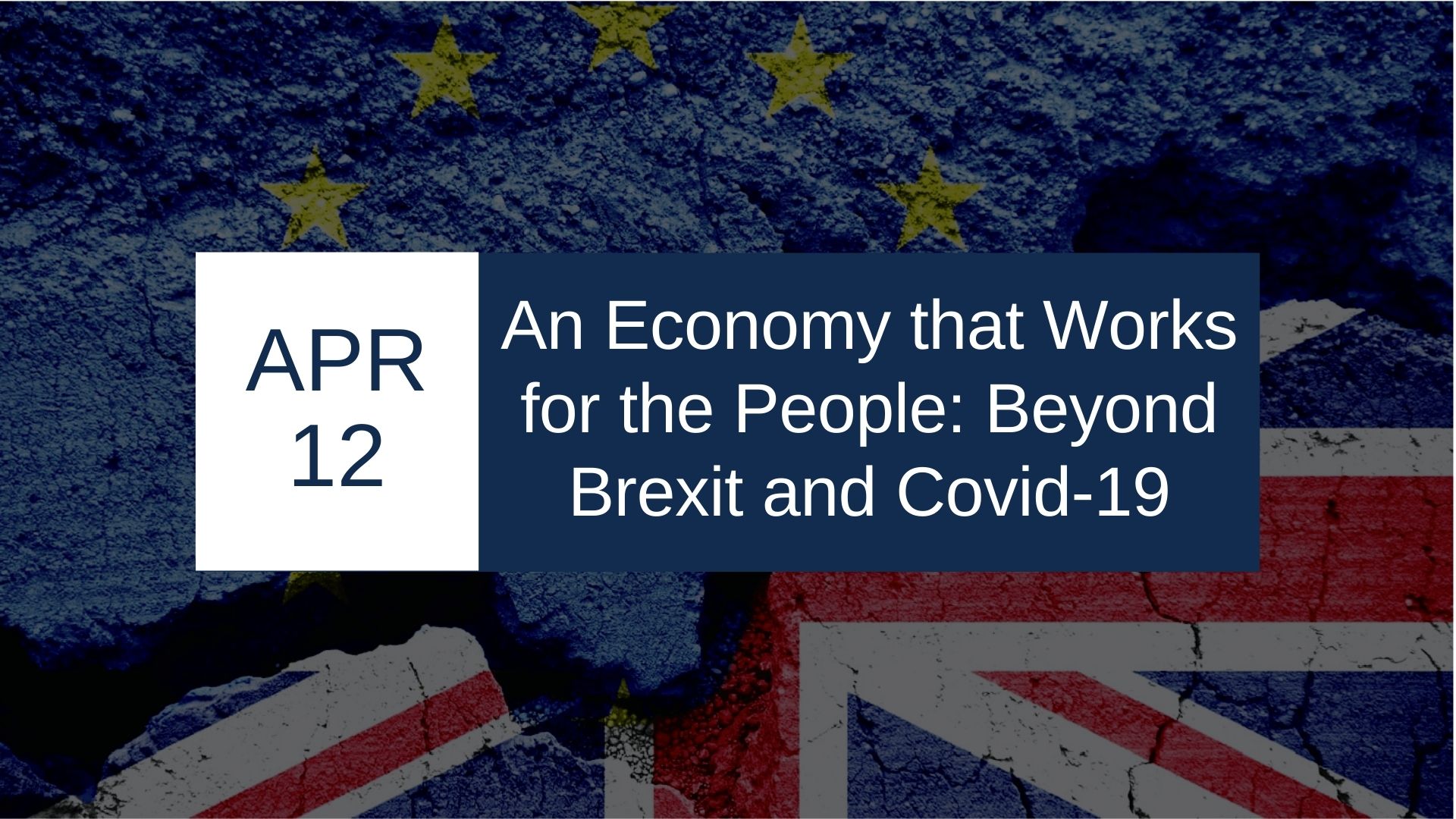 Event Report: An Economy that Works for the People: Beyond Brexit and Covid-19

On 12th April 2021, the DCU Brexit Institute hosted a day-long conference entitled “An Economy that Works for the People: Beyond Brexit and Covid-19”. The full programme is available here. The event featured an opening statement by Mr. Paolo Gentiloni, European Commissioner in charge of Economic Affairs, and took stock of the major development which Next Generation EU, the post-pandemic recovery fund, represents for the future of the European Union. It was organized in the framework of the Jean Monnet Project RELAY, an EU-funded Erasmus+ project, coordinated by Maastricht University, and involving a number of partners across Europe, designed to assess the policy priorities of the new European Commission. The Brexit Institute leads within RELAY the work package focused on the Commission priority of “An Economy that Works for the People”, which also gave the title to the event.

The conference was opened with an introduction by Federico Fabbrini (Professor of European Law, DCU, and Founding Director DCU Brexit Institute) and enriched by an Opening Statement by European Commissioner Paolo Gentiloni, who emphasised the need to look ahead at the challenges facing the EU economy. In his view, Next Generation EU is a turning point on the road towards a stronger Union, as it calls for action and investments in renewable and sustainable energy in light of the green transition. In parallel, it also requires investments in 5G, A.I. and automation, and private and public sector digitalisation. By stressing the need for justice and fairness in this process, Commissioner Gentiloni concluded his speech by observing that this is the first time in which Member States are called to put in place such a wide strategic plan in such a short time, therefore it will be ‘a test for the Union as a whole’.

The Opening High Level Dialogue on The EU Recovery Fund was chaired by Greg Hughes (Vice President for Research, DCU) and started with a presentation entitled ‘History will tell us’ by Alex Brenninkmeijer (Member of European Court of Auditors). In recognising the importance of looking at the bigger picture on the historical developments of the European Union, the speaker observed how the European semester in response to the 2008 financial crisis was a huge step forward in the field. Against this background, the Recovery and Resilience Fund is very innovative and performance focused, as it is financed by the capital market and an expression of the strong position of the Union in this context. When Thomas Wieser (former President of Eurogroup Working Group) took the floor, he noticed that fiscal asymmetry was only one of the aspects of the 2008 financial crisis, which testified a lack of institutional power at the EU level until the establishment of the European Stability Mechanism. In his opinion, the existing EU institutional and financial set up is still not sufficient to address the current challenges. Besides the EU green and digitalisation plans, those of inequality, governance and transparency remain central issues. Only if administration and politics become more accountable, more efficient and less corrupt, Next Generation EU could be a win-win for all. In the following discussion, Ramon Marimon (Professor of Economics, EUI) offered an interesting perspective from an economist’s point of view by focusing on the opportunity to improve and learn from the exceptional shock of the COVID-19 crisis.

Panel 1 on The New EU Economic Policy after Covid-19 and Next Generation EU was chaired by Christine Neuhold (Professor of EU Democratic Governance, Maastricht University) and involved a presentation by Michael Breen (Associate Professor of Political Economy, DCU). In considering Next Generation EU as a significant achievement in EU economic governance, he observed that the EU policy making community has learned from past crises and has improved the EU architecture in the field of economic governance. In his view, austerity is not appealing anymore and the EU has embraced its central role in defining the architecture of economic governance. The second speaker, Ramon Marimon (Professor of Economics, EUI), delivered a presentation on ‘The 5+2 after Brexit & COVID-19 Challenges’. After recognising that Next Generation EU implies an increase of the EU sovereign debt, he underlined the existing substantial economic gap between GIPS countries (Greece, Italy, Portugal, and Spain) and the rest of the Member States. In response, Professor Marimon called for the adoption of instruments ensuring national growth especially for GIPS, more effective fiscal rules, risk-sharing, common EU policies, and the creation of an integrated fiscal institution. In conclusion, he expressed his opinion that Next Generation EU will be a turning point for the EU for its ability to create joint liability or joint asset. Afterwards, Vivien Schmidt (Professor of Political Science, Boston University) offered an interesting perspective by looking at the status quo ante the creation of the Eurozone. She noticed that the EU needs more instruments to cope with the inequalities within the Eurozone, to provide a sustainable development, and to address the COVID-19 crisis. In this respect, the European Commission, which now has its own resources to advance its political agenda, has gained increasing relevance and power. Professor Schmidt concluded with a reflection on the temporary – rather than permanent – character of the Next Generation EU plan and on the need for a permanent and sovereign fund to address inequalities. The last speaker of the panel, Bart Vanhercke (Director of European Social Observatory), expressed his optimistic view on the Next Generation EU, which is a new and innovative policy experiment that inspired a new sense of solidarity at the EU level in terms of mutual responsibility among the Member States. In his opinion, the new European Commission is very ambition in respect to the EU Green Deal, which puts forward a new vision. To this extent, the COVID-19 crisis created a window of opportunity, on condition that all the money is well spent and good and quick investments and reforms are identified. During the following discussion, Ian Cooper (Senior Researcher, DCU Brexit Institute) emphasised the role of national parliaments in the implementation of the new fiscal capacity put in place with the Next Generation EU.

Panel 2 on The European Economy and the Future of the Eurozone after Brexit was chaired by Sharon O’Brien (Associate Dean for Research, DCU Faculty of Humanities & Social Science). The first presentation by Valerio Scollo (Partner, GSK Stockmann Luxembourg) underlined the disrupting effect of Brexit in the field of financial services, entailing substantive changes for companies in London. As a result, Luxembourg law has gained increasing importance in the regulation of the capital market. Afterwards, Oliver Mangan (Chief Economist, AIB) offered an economic analysis of the banking system’s role in addressing the challenges posed by Brexit. The economic impact of Brexit, he noticed, has been swamped by the impact of the COVID-19 crisis. Dwayne Price (Partner, Grant Thornton) stressed that the introduction of the Capital Markets Union plan certainly constituted a great innovation. In his opinion, the bifurcation of financial service regulation between the UK and the Eurozone began several years prior to Brexit. Brexit has only exacerbated the differences in approaches. With a view to the future, he expected banking regulation to remain within the national sphere, with the role of the EU institution still remaining rather marginal. The last speaker of the second panel, Federico Fabbrini (Director of the DCU Brexit Institute), delivered a presentation on ‘Economic Governance in Europe beyond Brexit and Covid-19’, where he individuated Brexit, the COVID-19 pandemic, and global change (especially in relation to the election of Biden as President of the United States) as major drivers of economic integration in the EU. Looking at the current challenges liable to create political uncertainty, Professor Fabbrini focused on the EU values in terms of rule of law crisis in Hungary and Poland, the governance of the EMU and of the EU, and the concrete transferring of funding to the Member States (also in light of the recent decision by the German Constitutional Court to suspend the ratification of Next Generation EU). Finally, he pointed out that the EU Green Deal and digital transition, together with strategic political autonomy, would represent great opportunities to rebuild and reform the European economy. The forthcoming Conference of the Future of Europe, for its part, will be an excellent opportunity to reshape the EU institutional structure. In his view, Next Generation EU is a paradigm change and the debate on the future of Europe will need to address the emerging issues in relation to financial services and the capital market.

The conference concluded with a High Level Debate on Next Generation EU and the Conference on the Future of Europe chaired by Federico Fabbrini (DCU Brexit Institute) and featuring the participation of four Members of the European Parliament. To begin, Domenec Ruiz Devesa (MEP, S&D, Spain) emphasised how the current situation in Northern Ireland testifies that Brexit was a terrible idea, although as indirect benefit the level of unity and political integration steadily increased. At the same time, the pandemic revealed the need for more Europe and also that there should be no competition among Member States. Besides reminding that full democratic legitimacy should be given to the Recovery Plan, he noticed the similarity between the 1948 Council of the Hague coming after World War II and the forthcoming Conference on the Future of Europe coming after the COVID-19 crisis. According to the second speaker, Gwendoline Delbos–Corfield (MEP, Greens/EFA, France), the Recovery Plan shows solidarity between Member States and also the intention of tackling the impelling issues related to climate change. The fact that the EU will have its own resources to realise its agenda also attests the adoption of a different approach from austerity. Mrs. Delbos–Corfield recognised the need to involve everyone from young persons to women and the current rule of law issues in Hungary and Poland as the major challenges to be addressed by the EU. Finally, she depicted Brexit as an opportunity for the EU to advance without the UK, which was already excluded from several EU policies, but also as a pity, considering that the UK is not involved in the discussion on the future of Europe anymore. Afterwards, Sandro Gozi (MEP, Renew Europe, Italy) strongly affirmed that ‘we have decided to bet our future on ecological transition and digital transformation’ and that both these commitments could represent a great opportunity for the Union’s relaunch. In conclusion, he expressed his opinion that only through solidarity measures, such as common EU debt and common EU bonds, we can recover from the crisis. Accordingly, he presented the principle of unanimity vote in EU institution as a potential barrier to such reforms to be realised. The last panellist, Danuta Hubner (MEP, EPP, Poland), declared that the European Peoples Party looks forward to the success of the Conference on the Future of Europe, and acknowledged that the pandemic showed the need for more Europe, for EU reforms, and for more involvement of the people in a multifaceted and intra-generation discussion. After expressing her concern that anti-European populists could hijack the agenda of the Conference on the Future of Europe, she affirmed that this Conference will not only be the place to seek pragmatic solutions but also the occasion to defend democracy and Europe’s foundations. During the following discussion, Noelle O Connell (CEO at European Movement Ireland) ensured full support from the Irish government to the development of initiatives aimed at inclusive dialogue involving all citizens and minorities.

Daire Keogh (President of DCU) thanked President of Ireland, Michael D Higgins and former Taoiseach, Bertie Ahern for attending and closed the conference by reaffirming the commitment of Dublin City University to contributing to the future developments of Europe.