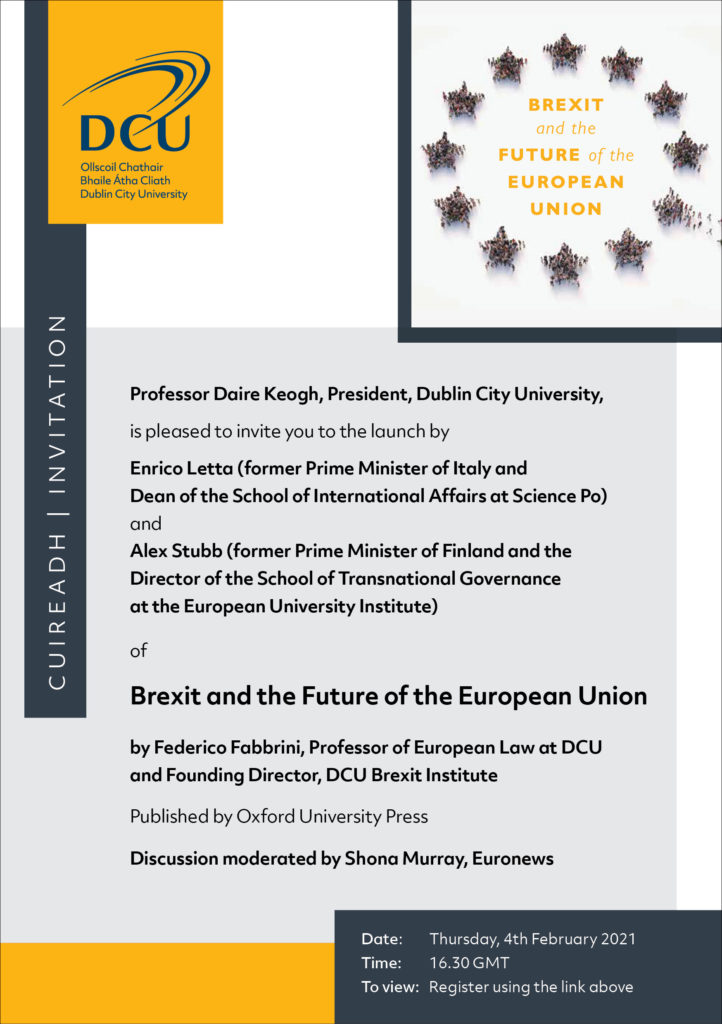 Event Report: Launch of Brexit and the Future of the EU by Federico Fabbrini

On Thursday 4 February 2021, the President of DCU, Prof Daire Keogh, in conjunction with the DCU Brexit Institute, hosted an event on the launch of Federico Fabbrini’s new book entitled “Brexit and the Future of the EU”.

The event was opened by Professor Daire Keogh (DCU President) and followed by the speeches of the former Prime Minister of Italy and Dean of the School of International Affairs at Science Po Enrico Letta and the former Prime Minister of Finland and Director of the School of Transnational Governance at the European University Institute Alex Stubb. The event continued with a round-table between those two former Prime Ministers, the Former Taoiseach Bertie Ahern, and Federico Fabbrini (Professor of European Law, DCU, and Founding Director DCU Brexit Institute), moderated by Shona Murray (Euronews).

After  brief introduction by DCU President Professor Daire Keogh, the former Prime Minister of Italy and Dean of the School of International Affairs at Science Po Enrico Letta started his speech by recalling his first presence, three years ago, at the DCU Brexit Institute. In underlying the ability of Professor Fabbrini’s book to link Brexit with the future of the EU, he pointed out the underestimation of Brexit’s positive impact in terms of solidarity between Member States. In his view, Brexit clearly emphasised the role of ‘a Europe where you are not alone’. Letta also considered Brexit as an impulse to improvement insofar as it made the approval of Next Generation EU possible. The unity among Member States to attain – what he called – Europe’s biggest achievement after the Euro and the EU enlargement was a result of a process whereby ‘the UK was not on board anymore’. Now the future of Europe depends on the actual Member State’s implementation of Next Generation EU. By referring to the latest news in Italy, he welcomed the former European Central Bank president Mario Draghi’s acceptance of the assignment to form a government for the his capacity to embrace the challenges posed by Next Generation EU. Letta expressed his appreciation for Professor Fabbrini’s book chapter on the Conference on the Future of Europe, and stressed the need to preserve the EU Institutional Triangle with a more defiladed role of the European Council. In conclusion, he strongly encouraged higher involvement of students in EU politics, giving relevance to the many initiatives taken at University level all over Europe.

When the former Prime Minister of Finland and Director of the School of Transnational Governance at the European University Institute Alex Stubb took the floor, he initially recalled his meaningful connections with Ireland. Building on his great expertise developed as Prime Minister, when he took part in numerous negotiations on the shape of Europe, he affirmed that ‘Brexit is the most stupid thing that a nation state has done in recent history’. He observed, nonetheless, that while the UK supported an anti-European rhetoric over the years it still promoted EU integration in practice with respect to different sphere, in primis free movement of workers, services and capitals. In fact, the UK was mistakenly put under an anti-European light. Stubb praised Professor Fabbrini’s book for its overall Brexit perspective on the future of Europe, positively pointing out the three competing models of the European Union identified therein, namely solidarity Union, market Union, and nationalistic Union. Furthermore, he defined the Conference on the Future of Europe as a hybrid type of conference with typical features of the consultations leading to the adoption of the Treaties of Amsterdam, Nice, and Lisbon. He called for less institutional and more political results, mainly aimed at addressing the most urgent issues which Europe is currently facing, starting with the ongoing COVID-19 crisis. He concluded his speech with a call to stop talking about the finalité of the European Union, meaning that the Union should not be seen as a utopia anymore, but rather as a three-phase process involving ‘crisis’, ‘chaos’, and ‘sub-optimal solution’. The latter phase is where the EU integration process should be oriented to now.

The event continued with a lively debate moderated by Shona Murray, who invited the speakers to a reflection on the solidarity implication of the recent EU decision to trigger Article 16 of Northern Ireland Protocol to place controls on export of Covid vaccines to Northern Ireland. Both Letta and Stubb agreed on considering this action as a huge mistake by European Commission President Ursula Von der Leyen. The former Prime Minister of Italy expressed his concern for the possible negative consequences in terms of anxiety for future and repercussion on solidarity. He called for more solidarity, transparency, discussion and unity between the Member States, while criticising the opt-out options picked by the UK and Denmark. The former Prime Minister of Finland, in turn, criticised the Commission’s action for the lack of solidarity, free movement concern, and understanding of the transnationality of the Covid pandemic. With regard to the current issues of vaccines distribution, Letta called for prompt reactions from the EU leaders to prevent the spread of the idea – unfairly put forward by Boris Johnson – that being out of the Union is better than being in the Union. Stubb focused on the redistributive value of the Union, although he lamented the still limited EU budget to address properly the current challenges. ‘We are on the same boat’ from both an economic and a health perspective, he said in relation to the pandemic.

Later the conversation moved to the future of the UK and Stubb predicted two possible scenarios: the progressive dismantling of the UK (with Scotland leaving first) or the return of the UK back in the EU. The discussion was enriched by the participation of the Former Taoiseach Bertie Ahern who underlined the strength of the ‘Remainers’ in Northern Ireland and expressed his concern that they could turn into anti-Europeans due to the poor management of vaccines distribution. Finally, when asked if Brexit could potentially accelerate the unification of Ireland, Letta concluded with a reply full of hope by pointing out that already ‘in rugby it works’ and that the EU could be the right environment where this dream could come true.

Professor Fabbrini concluded the discussion stimulated by his book by recognising, at first, that Brexit is already a unifying booster for the EU. He defined the Conference on the Future of Europe as an out-of-the-box initiative able to foster EU integration and which should focus on the institutional and governance issues as well, towards a ‘more perfect Union’. He closed by emphasising the importance of education in the process leading to Brexit, as Brexit was the result of poor knowledge of what Europe is about and, especially, of the EU values.

A recording of the event can be found here