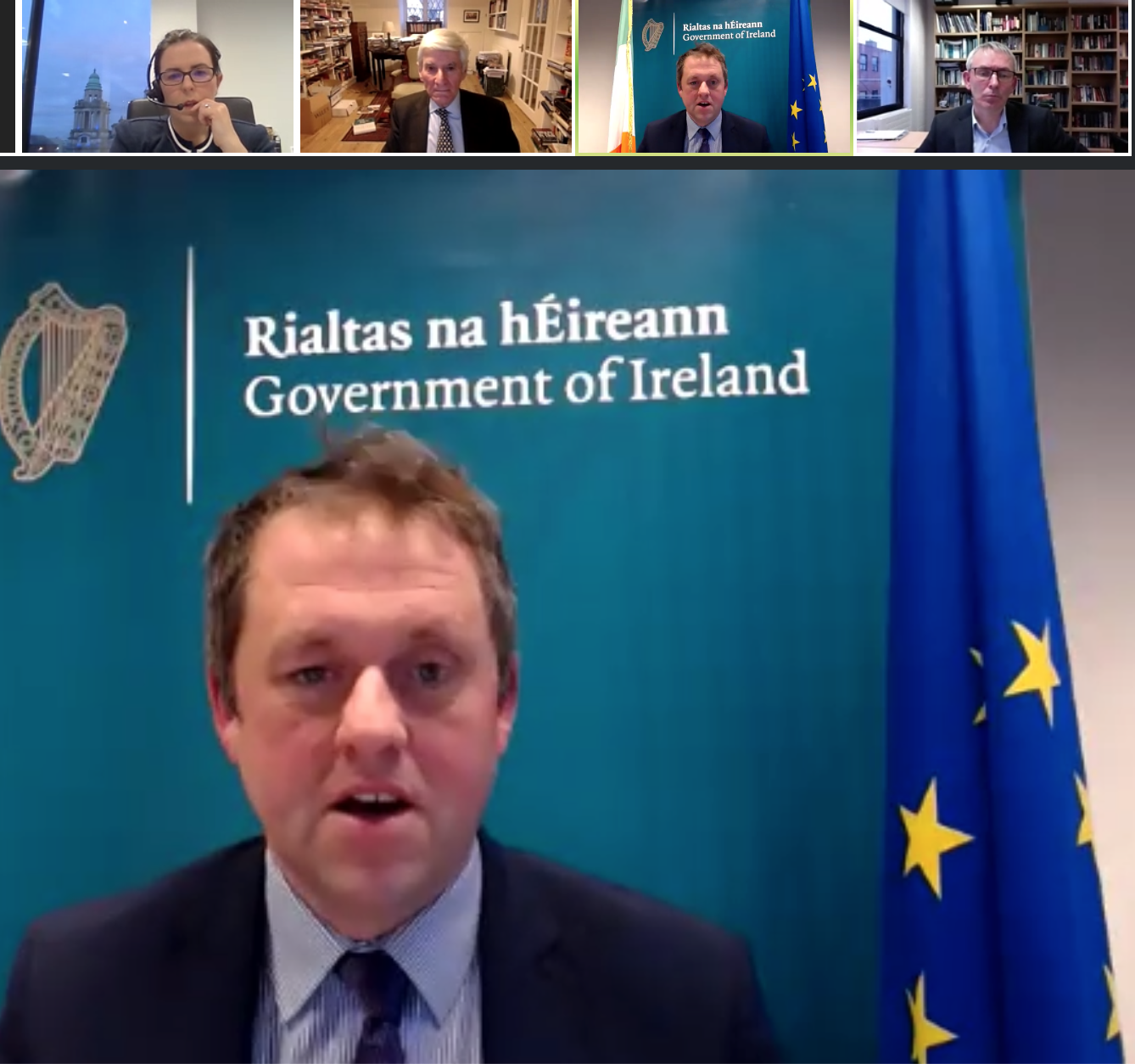 Beyond the Transition Period: Brexit and the Conference on the Future of Europe

On Thursday 26th November the DCU Brexit Institute hosted an event on “Beyond the Transition Period: Brexit and the Conference on the Future of Europe”.

He stated that the negotiations for the future relationship with the UK are in a decisive phase, with only very little time remaining. Talks have resumed very recently, but on issues as governance and fisheries key progress are yet to be made. He also mentioned that Ireland and EU partners want a deal, but not at any price. Barnier has been a good friend of Ireland and he is acutely aware of Irish concerns. The Minister continued pointing that he had a series of bilateral calls with Irish-EU partners and they were extremely aware of Irish needs. He also underlined that the Withdrawal Agreement(WA) is in operation regardless of if a future agreement on the partnership is available, and that the Protocol on Northern Ireland is an essential part of the WA. The Protocol protects the Good Friday agreement and avoids a hard border, but also protects the integrity of the EU internal market. He also focussed on another key issue, the preparation for the end of the transition period. The end of the transition will imply substantial changes and Ireland should be prepared. Even with a deal, he said, the seamless trade we are used to will not continue. He however said that the support of EU partners gives Ireland strength. He concluded by mentioning the Irish priorities for the Conference on the Future of Europe, with combating protectionism and promoting free trade as some of them. The Conference – he said – should provide the setting for discussion, but its focus should be on citizens and policies rather than on processes and procedures.

Professor Fabbrini (Founding Director of the Brexit Institute) continued the discussion. He kicked-off saying that Brexit is a prism of the state of the European Union and that in this sense the EU showed a remarkable degree of unity. He also said that, notwithstanding that, the case for reforming the European Union is strong. He is of the view that the prospect of the EU is to look quite deeply into its governance scheme and assess what does it works and what doesn’t. Amend the treaties is difficult, but it is known that other parts of EU law, as the EMU, have been reformed via new intergovernmental treaties, and this provides an opportunity that should be taken into account by policymakers.

The round-table continued with Professor Bogdanor (King’s College London). He opened pointing out that it would be best for Britain to get a trade deal rather than not getting it. He is worried – continued – that Britain will be soon outside the internal market: now it is easy to send goods in Europe as it is in the UK, but it is less clear if this can take place in the future. He mentioned how the example of the border with Turkey is also useful to understand the difficulties of being outside the internal market. However, he also mentioned that the extent to which the European Union has becoming detached from its people is also to be carefully assessed. The Euro and migration show that the EU should embrace a more intergovernmental approach and that perhaps the European Commission should become more a secretariat of the Council, rather than a self-standing government. In sum, a Gaullist vision of Europe. Professor John Doyle (Dublin City University) continued the discussion focussing on the importance of the European dimension outside Europe, outlining in particular how the European Commission has been leading the change attempting successfully to compose the competing interests of the various European states.

Louise Kelly (Partner of Grant Thornton Belfast), focused in particular on the needs and the position of Northern Ireland. She outlined that many issues could bring in a potential burden for businesses. Goods from Great Britain(GB) to Northern Ireland (NI) (and vice versa) will require custom documentation, and this is not going to be simple. At a high level, there is a lot of uncertainty due to the fact that there is no deal. The UK government is launching a service to help GB and NI business in the transition but is only coming to speed on 21 December, one week before the transition. She also mentioned several sector-specific issues that still need to be taken into consideration, as the VAT Scheme for motor retail, labelling for foods coming from Northern Ireland and duplication of standard testing in manufacturing.

After the roundtable, a living debate moderated by Shona Murray took place. Among the issues tackled, how the Irish government is ready for Brexit, and how Brexit has been oversold as an opportunity rather than a challenge for the United Kingdom.

Image credit: Screenshot of the Irish Minister of State for EU Affairs Thomas Byrne at the DCU Brexit Institute Event