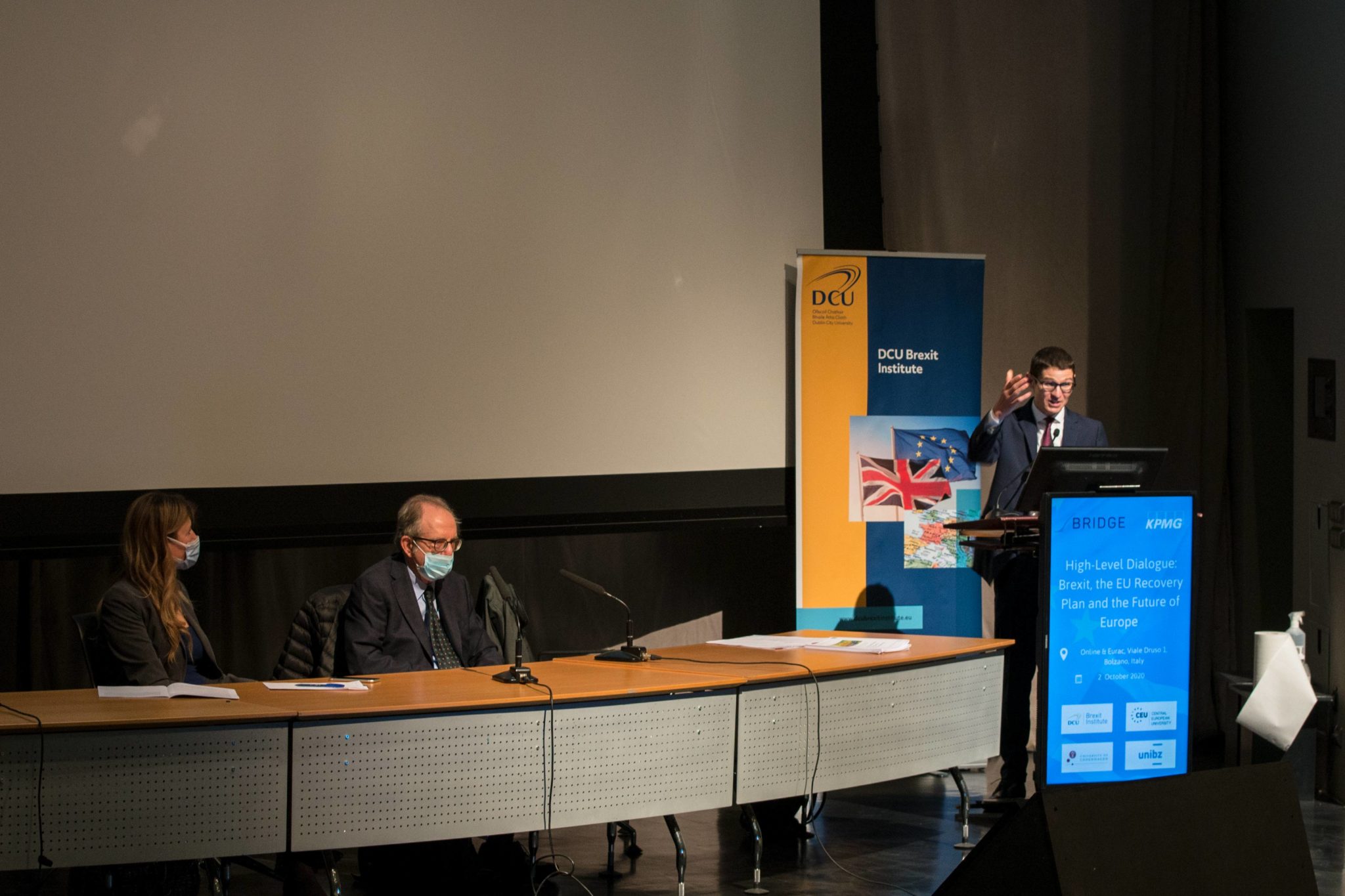 Beyond the Euro-crisis: Covid-19 and the Future of Europe

The Free University of Bozen-Bolzano hosted on 1 &2 October the second conference of the BRIDGE network event series, in collaboration with DCU Brexit Institute, the University of Copenhagen and the Central European University.

The conference focussed specifically on the issues of Brexit and the legacy of the Euro-crisis and their implications for the future of Eurozone governance and Economic and Monetary Union (EMU).

The event was opened by Silvia Baroncelli (University of Bolzano), who introduced to the audience the BRIDGE network and gave a few welcoming words.

Federico Fabbrini introduced the discussion with a description of the challenges posed by the EMU legal framework. He then remarked the exceptional circumstances where we are, that required exceptional answers by the EU institutions underlining how this was achieved at incredible speed. Michele Chang, on the other side, discussed if Covid19 could be a catalyst for a political union in the EU. She described how the various EU instrument prepared for react to pandemic crisis (ESM, PEPP, Next Generation EU) but she also noted that there is still very little domestic policy support to the EU measures. Roberto Tamborini, taking up an economics viewpoint, presented the trilemma of the ECB measures as in between fiscal and monetary orthodoxy and described their implications. Finally, Alex Weissensteiner described the implications of the pandemic crisis on the EU economies, focusing in particular on Italy.

Panel 2, on ‘EMU Governance and Constitutional Differentiation’ was chaired by Ian Cooper (Brexit Institute) as saw the participation as speakers of Sune Klinge (University of Copenhagen), Agnieszka Smolenska (Polityka Insight) and Giovanni Zaccaroni (Brexit Institute). Panel 2 dealt, with reforming EMU from different perspectives: Sune Klinge explained the various Danish opt outs, Agnieska Smolenska the EMU framework and the banking union and Giovanni Zaccaroni the EMS, in the present and in the future of the EMU. After Panel 2 took place the launch of the BRIDGE Massive Open Online Course: “The European Union: Crisis and Recovery” presented by Ian Cooper (Brexit Institute).

Panel 3, on  ‘The Euro-Crisis in Context: Values, People, Money’, was chaired by Renata Uitz (CEU), and featured Orsolya Farkas (University of Bolzano), Annelieke Mooij (DCU), Maciej Kisilowski (CEU) and Leila Simona Talani (Kings’ College). Orsolya started the round of presentation discussing the rights of irregular migrants in the EU. Then Annelieke continued on the role of the ECB in fighting the pandemic crisis, also presenting the ECJ case law on ECB’s powers. Third intervention was by Maciej Kisilowski, who introduced a new perspective on the promotion of EU values within an EU constitutional strategy. Last contribution was by Leila Simona Talani on the role played by underground economy in the decline of Italy’s economic growth. Leila made a very interesting description of the EU and Italian economy and underline the perils that underground economy poses. The debate was, as usual, carachterised by a lively discussion.

Panel 4 on ‘The ECB, The ECJ and the National Courts’, was chaired by Federico Fabbrini and featured Simon Drugda (University of Copenhagen), Matthias Goldman (University of Frankfurt) and Renata Uitz (Central European University). Matthias Goldmann explained in detail the approach of the German Constitutional Court towards the various ECB judgments, and in particular how they nurture the claim of a new paradigm, integrative liberalism, upheld by the German Constitutional Court. Simon, on the other side, focused on the role of the Danish courts in reacting to the pandemic response via expansive monetary policies. Renata concluded the panel discussing the European case law in light of rule of law backsliding.

The Final High-Level Dialogue on ‘Brexit, the EU Recovery Plan and the Future of Europe’ was hosted by Eurac. Federico Fabbrini (Brexit Institute) – after an introduction by Roland Psenner, President of Eurac – introduced and moderated a lively discussion between Stefania Baroncelli (University of Bolzano), Massimo Fabio (KPMG) and Pier-Carlo Padoan (former Minister of Finance of Italy). 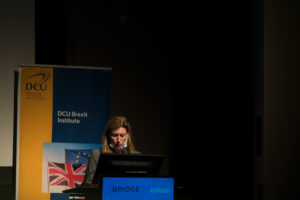 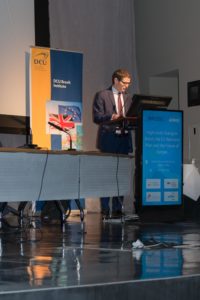 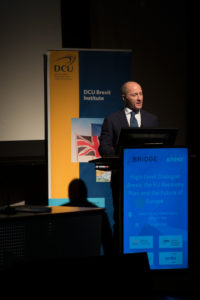 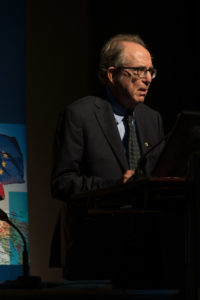 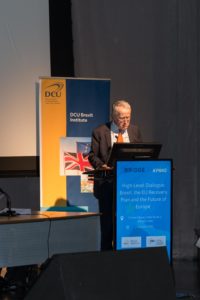 Stefania Baroncelli opened the Final Dialogue with an interesting description of the various measures introduced to counter the pandemic crisis. She focussed on the role played by the ECB with the PEPP (Pandemic Emergency Purchase Programme), read in light of the case law of the Court of Justice, in particular in Weiss. Then, Pier Carlo Padoan, former Finance Minister of Italy (2014-2018) took the floor. In his speech, he pointed out that ‘Next Generation EU’ is a very powerful driver of change and if used appropriately, could also facilitate EU integration. The instruments that the Commission proposed to fund this initiative will be financed by issuing bonds according to European targets. They are not, of course, the traditional Eurobonds, but they were created to achieve and fund an European target. The EU budget is the framework to allow these instruments to be organised, which leads to the debate on EU own resources. This is about a web tax, a green tax and taxes that address fundamental challenges already on the top of the agenda by Von der Leyen in her State of the Union. These are money for European target and designed as part of a European strategy. These instruments are not temporary but are here to lay the foundations of something that is here to stay. However, there should be a collaboration between national and European administration. The money will be given to countries only when they demonstrate that they spend their money well. Structural reforms generate benefits in the long term, while politicians want benefits in the short term. This is the main political challenge that should be addressed.

Then, fiscal union: a very high political and technical challenge. We need to rebalance the EMU framework by having a strong central bank but also with a strong fiscal centre.

A final challenge is the new global role for Europe. If we intensify fiscal union and we have stronger structural reforms programme we will have all building blocks to have a strong Europe globally. Unfortunately, the global environment is less cooperative and more conflicting.

Last, came the speech by Massimo Fabio of KPMG, sponsor of the event, who addressed the fear of the enterprise and of the economic environment against the crucial challenges we are facing, starting with Brexit. First, it is a matter of new taxes, burden and levies, that we might see starting 2021. Second, another issue will be also the conformity of the products that are delivered throughout Europe. Third, free movement, in all sense. We have been used in the last years to move freely, as persons, businesses, capitals. A free trade area to put together all the aims of developments. Now, the UK generates some fears of the disintegration of this project. The GATT agreements gave tools as a free trade area that further evolved with a customs union. We do not have a fiscal union, but we do have a customs union. He concluded expressing concerns about the Internal Market Bill, that was recently adopted by the UK Commons, and this generates some fears among the enterprises and businesses.

The event was concluded by a Q&A session that attracted the attention of the public, both in presence as well as online.