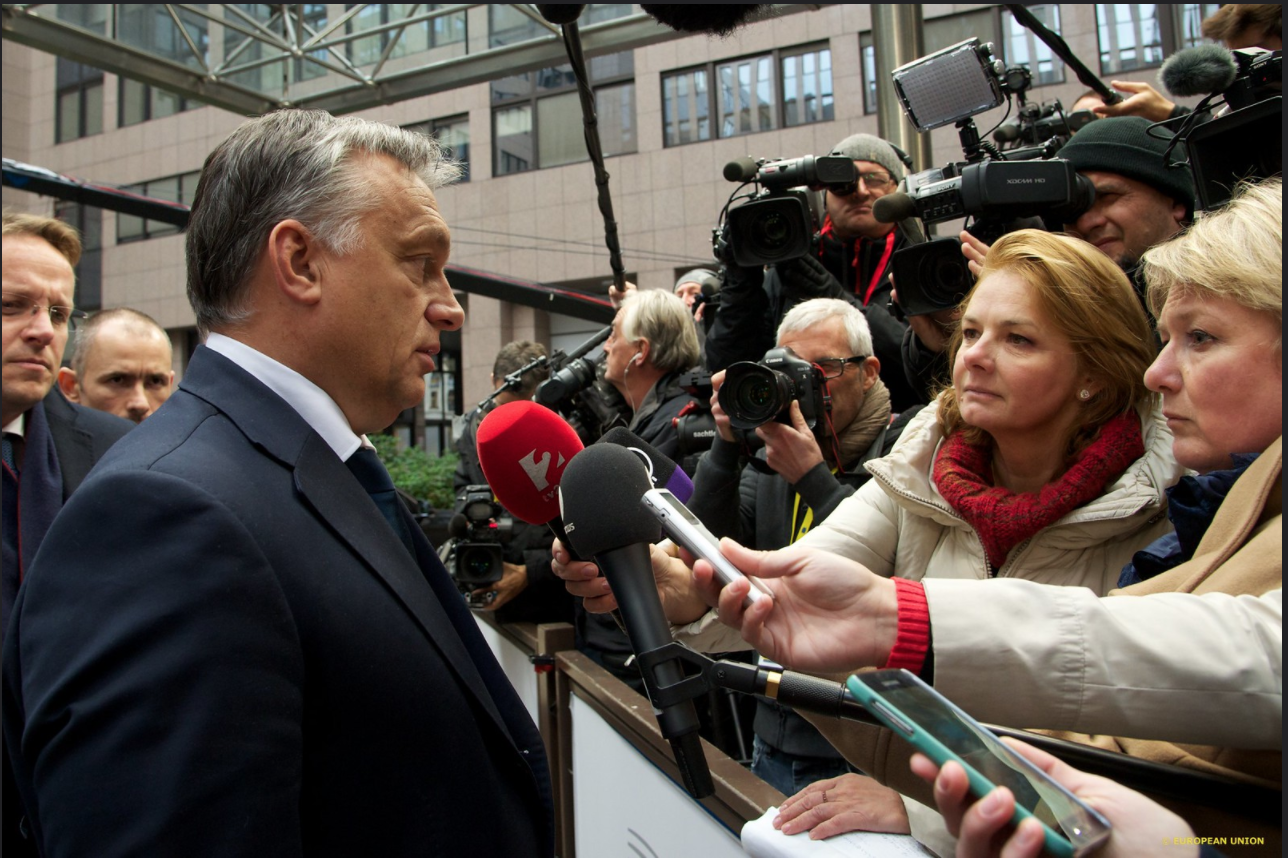 The rule of law, democracy, and the freedom of the press are the fundamentals of our liberal European democracy — a liberal democracy that is currently challenged in some Member States of the European Union (EU). The protection of the rule of law, democracy, and the free press is timelier than ever while Europe is going through its most unprepared crisis since its foundation. I am referring to the global outbreak of Covid19 that caught many Member States completely unprepared. While the EU is caught in pandemic response, some European leaders use the crisis as a backdrop to enact new autocratic legislation under the cloak of the protection of the civil population. Commentators have highlighted developments in Romania, Poland, and the recently enacted emergency legislation by the Hungarian Parliament.

Public Health or a Rule of Law Crisis?

These developments might mark a new stage of the rule of law crisis in the EU. The rule of law crisis is the most fundamental crisis that the EU is facing since its foundation. It is targeting the very core of European integration – integration through law. The EU’s legal order would lose its validity and value if the attack on the independent judiciary in some Member States were successful. This would eventually mean the end of the European project. This blog post will, first, explain why the recently adopted emergency legislation by the Hungarian Parliament plays a role in this and, second, map the European response to this potential threat to the rule of law and democracy in the EU.

The Hungarian Response to the Crisis

The measures of the Hungarian government to fight the Covid19 pandemic were enacted very swiftly. Hungary was a vanguard in enacting measures to fight Covid19, similarly to many other central European states. Already in late January, the Hungarian government released an action plan on Covid19. On March 9, the Hungarian government allocated 24 million EUR to combat the economic consequences of the virus. On March 11, Hungary declared a state of emergency, imposing travel bans on many countries. Moreover, on March 13, Hungary closed school, kindergartens and nursery homes in the country. Finally, on March 16, Hungary nearly entirely closed its borders to foreigners. The Hungarian Parliament passed the emergency bill on March 30. According to Article 53 of the Hungarian Fundamental law, the new bill is enacted under the state of danger and gives the Prime Minister extensive powers.

How did Covid19 came to Hungary? The first outbreak of Covid19 in Hungary was allegedly traced back to an Iranian student, according to the Hungarian government. This led the government to the general claim that migrants brought the Coronavirus to Hungary. Hungary’s Prime Minister fueled this sentiment by stating that the government “observes a certain link between coronavirus and illegal migrants.” The legally subscribed Iranian students who contracted the virus were expelled from Hungary and banned from the country for at least three years. In a radio interview, Orban further stated that “it is no coincidence that the virus first showed up among Iranians.” The pointing out of Iranians students as the cause of the Covid19 outbreak caused a diplomatic crisis between the two states.

What does the new state of danger bill entail? Kim Lane Scheppele kindly provides an English translation on her blog. The bill enables the government to ‘rule by decree.’ This means that the Prime Minister has the power to overwrite any law by executive order. Under the new bill, the spread of misinformation can result in 1 – 5 years of imprisonment. Further, the bill suspends all elections and referenda for the foreseeable future. Finally, the law does not contain a time limit and is therefore indefinite, if not suspended by a two-thirds majority in Parliament. This implies that it will be a discretionary decision by the governing party to end the state of danger since the opposition only holds one-third of the seats in the Hungarian Parliament and can, therefore, not challenge the bill.

The EU’s Response to the Hungarian State of Danger Bill

The European Commission’s (Commission) response to the measure enacted came quickly, however, without mentioning Hungary. On March 31, Commission’s President Von der Leyen reiterated that “[a]ny emergency measures must be limited to what is necessary and strictly proportionate. They must not last indefinitely. Moreover, governments must make sure that such measures are subject to regular scrutiny.” The newly enacted bill by the Hungarian government fails on all three conditions mentioned. Von der Leyen’s general statement, which lacks to point out the relevant Member States that it concerns, mirrors her earlier remarks in a German newspaper in which she argued for a conciliatory approach to the rule of law deficiencies in the Member States. Her stance on the rule of law deficiencies was widely critiqued.

The European Parliament (Parliament) opposed the newly enacted measure in a much more robust fashion. David Sassoli, President of the European Parliament, alerted on April 1 fellow Parliamentarians and European citizens about the bill. “We want to get out of the crisis with our democracies intact. We have asked the European Commission, as the guardian of the EU treaties, to assess whether the new laws introduced in Hungary comply with Article 2 of our treaty.” This is a clear statement that the Parliament is willing to act in contrast to the Commission’s President. However, the capabilities of the Parliament are restricted given that parliamentary debate and voting are moved online during the current pandemic.

Is a European Judicial Review of the Hungarian State of Danger Bill Possible?

The state of danger bill contradicts European values, therefore, it infringes upon Article 2 of the Treaty on European Union (TEU) which states that “the Union is founded on the values of respect for human dignity, freedom, democracy, equality, the rule of law and respect for human rights, including the rights of persons belonging to minorities.” The newly enacted state of danger conflicts specifically with the value of freedom (the freedom of the press), the rule of law (effective parliamentary scrutiny), and democracy (elections are suspended). Those core values are suspended indefinitely by the state of danger bill. Given this violation of European values, the Commission could bring an infringement proceeding (of EU law) against Hungary under Article 258 Treaty on the Functioning of the European Union (TFEU).

However, it is highly doubtful if a legal challenge by the Commission against the bill would be successful. The judicial applicability of Article 2 TEU is a hotly debated topic of EU law. Many scholars contest the direct applicability of the merely inspirational values of Article 2 TEU. The Court of Justice of the European Union (CJEU) has demonstrated its willingness to protect the value of the rule of law via Article 19. Contrary, the CJEU never affirmed the independent applicability of Article 2 TEU to strike down a national measure. The Commission will, therefore, need to find a different provision of EU law to bolster its claim if it wants to challenge the Hungarian state of danger bill at the CJEU.

The responsible European Commissioner for Values and Transparency, Věra Jourová, displayed a tentative attitude toward the state of danger bill and highlighted in a recent Podcast on March 31, that the Commission would assess the enacted Hungarian legislation after it went into force. She reiterated that the Commission would compare the Hungarian state of danger bill to other Member State’s emergency regimes to find if its proportionate or excessive. It is questionable if this timeframe is adequate given the gravity and the irreversible consequences of the legislation.

Hungary’s Minister for Justice, Judit Varga, seemed to have already anticipated the EU’s response when she stated on March 31, in an interview with the Austrian TV, that EU Member States should not damage each other’s effort to fight the Covid19 outbreak. Besides, she reiterated that the state of danger bill is proportionate and necessary to fight the virus. Further, she stressed that there is still the possibility to challenge the bill at the Hungarian Constitutional Court. This argument is preposterous under the circumstances that all ordinary court work in Hungary is currently suspended due to the state of danger. The only pathway to challenge the state of danger bill domestically would be a legal challenge by the Ombudsman or by one-quarter of the members of the Hungarian Parliament. However, this has never happened since Orbán took office in 2010. Besides, even if a challenge would reach the Constitutional Court, there are doubts about the impartiality of the Hungarian Constitutional Court.

The potential to challenge the newly enacted state of danger bill in Hungary or on the European level appears marginal from the outset. The bill gives the government the broadest emergency powers and does not include a sunset clause. Scholars have argued that Covid19 might have functioned as the ‘Reichstagsbrand’ of Hungary. The threat of the state of danger bill to democracy, the rule of law, and the freedom of the press is imminent. The most potent political response to the state of danger bill was expressed by the Luxembourgish Foreign Minister, Jean Asselborn, in an interview with the German TV on April 1, in which he urged the Commission to strengthen its message to Hungary and clearly expressed his view that Hungary is on its way out of the EU with the newly enacted state of danger bill.

Other scholars have argued that the government has calculated with criticism from EU leaders, which plays into their narrative as they now argue “the Western liberals attack them.” This, in turn, might help them to mobilize their voters for the next election (if there is one). Finally, it remains to be seen how the Commission reacts to this blatant attack on a liberal democracy within the EU. While the rule of law crisis is a political conflict, the Commission might decide to use judicial warfare and refer Hungary in front of the CJEU since the political route of Article 7 TEU is currently blocked. An assessment of the state of danger bill by the Commission will likely only happen after the Covid19 pandemic eases. Given this time lag, EU and Member State officials must illustrate now that the state of danger bill in the current form contradicts European values and should be amended.

Niels Kirst is a Ph.D. Researcher in EU law at the School of Law and Government, Dublin City University