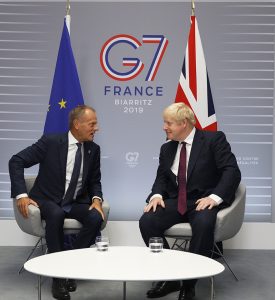 In early September 2019, a few weeks after Boris Johnson became Prime Minister, French Foreign Secretary Jean-Yves Le Drian explained France was not favourable to postponing Britain’s departure from the European Union beyond the October 31st deadline. “We won’t start over again every three months… Let the British authorities tell us the way forward. Let them take responsibility for their situation… They have to tell us what they want”, Le Drian said.

But as the next European Council draws near, talks of a new extension are rife, especially after the adoption of the Benn Act by the British Parliament. In case the House of Commons does not give its consent to either a new withdrawal agreement or leaving without a deal by October 19th, the PM would have to request a new extension from the EU. The new withdrawal date is set to January 31st, 2020, if the proposal is accepted by the European Council.

In April 2019, French President Emmanuel Macron only reluctantly granted an extension to avoid a no-deal exit. And Jean-Yves Le Drian’s declaration last month have confirmed France’s attitude is one of opposition to endless delays to Brexit. However, given the latest developments in British politics, and in the likely absence of a new withdrawal agreement, the European Council can be expected to grant a new extension, were the British PM to request one. This implies neither France nor any other Member State would oppose the decision.

Emmanuel Macron’s stance before the April 2019 European Council could be explained by the difficulties the extension was expected to cause at a moment when the EU was getting ready to vote for the European Parliamentary Election. Macron’s ambition was to fight a campaign in favour of a more ambitious Union in which France would play a leadership role. He feared an extension that required the organization of the EP elections in the UK – with the rise of Nigel Farage’s Brexit party – would give Eurosceptic parties an unwelcome boost in other EU countries. French officials particularly dreaded endless extensions to Brexit would fuel the idea that the British voters’ will was being ignored, just like, according to some Europhobic parties, French voters’ opposition to the European constitutional treaty in 2005 had been bypassed when the Lisbon treaty was adopted in 2007.

At the EU level, Brexit, for all the economic and political damages it is expected to cause, is also perceived as an opportunity to move forward on many European projects that were slowed down or even blocked by the UK’s reluctant attitude towards European integration. That is particularly the case in CFSP and CSDP, but other reforms, like the reform of the eurozone governance, are also envisaged and France intends to play a forefront role alongside Germany in shaping the future of the EU following Britain’s departure. Delaying Brexit means the EU is not ready to move forward as long as Britain’s status remains unclear. By threatening to veto any further delay, Macron has intended to pressurise the UK into clarifying its intentions and has meant to prove France is willing to lead the EU into the post-Brexit era.

But in the end, the April 2019 European Council’s decision to grant an extension was made in order to avoid the catastrophic consequences that a no-deal Brexit would have had for both Britain and the EU. Member States are particularly aware of the consequences a no-deal Brexit would have for Irish interests, were the border between Northern Ireland and the Republic of Ireland to become a hard border. The same reasons will probably lead Macron and other EU leaders to grant the UK another extension in the absence of a new agreement at the next Council.

Besides, Prime Minister Johnson having lost its majority in the House of Commons, his resignation followed by the nomination of a caretaker Prime Minister or a new General Election have become likely possibilities. In this context, Macron and other EU leaders can be expected to give the UK extra time to design a new way forward, as a new Prime Minister and a new parliamentary majority could follow a completely different path from that of the current Conservative government.

Thibaud Harrois is a Senior Lecturer in British Politics at the Université Sorbonne Nouvelle – Paris 3.