A Flowchart Chronicle of a Mess Foretold

Teaching a class last year on Brexit to American students, I discovered that—like impatient readers of a “Whodunnit”—they wanted to know how it would all turn out. “Too early to say,” I’d tell them. “Too many ‘known unknowns’ and even ‘unknown unknowns,’” (and then pause to explain who Donald Rumsfeld was). But since the students kept pressing, I tried to produce a flowchart of how things might go. Looking back, it’s interesting to see both how much and how little has changed. Perhaps most surprising of all is the fact that now more than two years after the Referendum, the UK government is yet to make clear its preferences, votes in the UK parliament are very hard to predict, and it’s not even clear whether Theresa May can survive the negotiations without another General Election. It’s as if we are on the last page of the “Whodunnit,” a few short paragraphs to go, and we still don’t know the murderer.

I produced my first Flowchart in September 2017 (See image below). By this stage, it had become clear that there were at least three different agreements necessary before the UK could exit the EU. Crudely stated– a Stage One Agreement showing that the UK had made “sufficient progress;” a Stage Two agreement on a transition and a Stage Three agreement on the terms of a withdrawal (to be agreed concurrently with the transition agreement.) 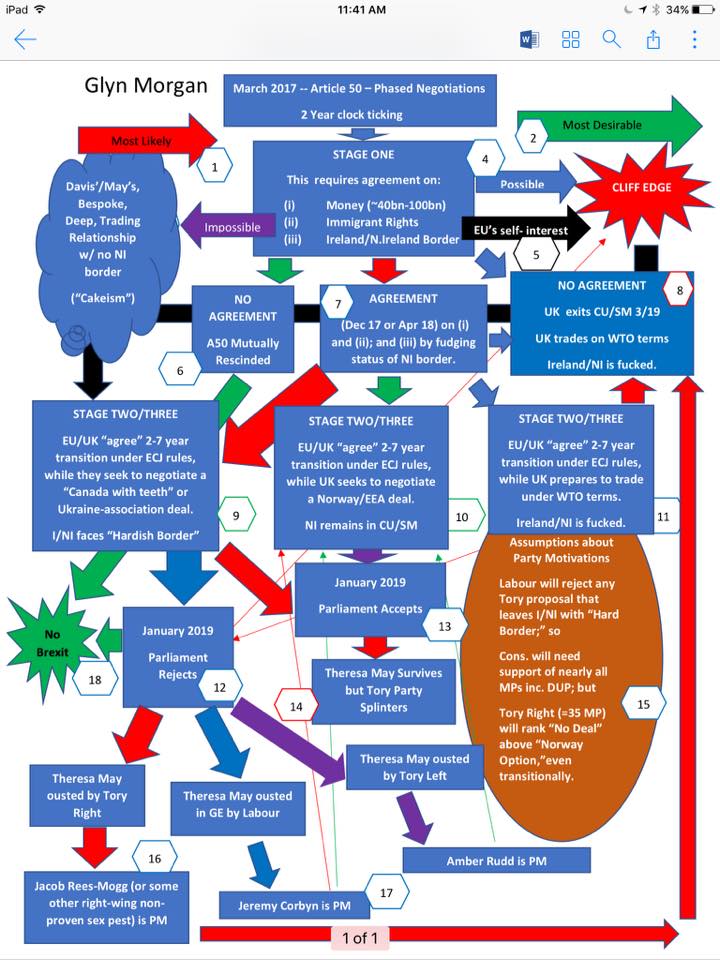 I traced what I thought would be the most likely outcome (red arrow from Boxes 4, 7, 9, 13, 14.) The outcome, I predicted at the time, would be a Transition Agreement of 2-7 years and a Withdrawal Agreement based on a minimal Canada-style FTA, which the UK Parliament would sign in January 2019. Such an Agreement entailed a Hard Border – both between Northern Ireland and Ireland and between the UK and Europe. Since I thought (and continue to think) that any such Withdrawal Agreement would prove economically ruinous for the UK – not least because it is difficult to see how the UK’s just in time car manufacturing could survive a Hard Border – I suspected that this outcome would lead to a bunch of pro-Europe Tories leaving the Party in disgust. Indeed, I thought that this outcome would only be able to pass Parliament because the number of pro-Leave Labour MPs would exceed the number of pro-Remain Tory MPs (regardless of the instructions of their respective Party Whips).

One thing I got right: a long transition. (Recently we heard that Mrs May is seeking to extend the transition until 2025 or so.) One important thing I got wrong in this initial flowchart (written in September 2017 remember) was to underestimate the role Ireland and Northern Ireland were to play in later negotiations. I should have noticed—but failed to do so—that the UK position paper of August 2017 had committed the UK to No Irish Border. And Mrs May reiterated that position quite bluntly in her Florence Speech of September 2017: “we will not accept any physical infrastructure at the border.”

The Flowchart also traced a more desirable outcome—a Norway type outcome (EFTA/EEA). This was the preferred outcome of a number of Labour Party Remainers – including, Hilary Benn and Stephen Kinnock. I didn’t at the time, however, think this was likely, because I couldn’t see a Parliamentary majority for this outcome. Theresa May explicitly ruled out the Norway model in her Party Conference Speech of October 2016; and this form of Soft Brexit was a complete anathema to the 60 odd members of the European Research Group (hardline Brexiters headed by Jacob Rees Mogg). Furthermore, Barry Gardiner, the Shadow Trade Secretary, dismissed the idea of a Norway option as the equivalent of the UK becoming “a vassal state.” In short, if the Labour Party wasn’t going to support the Norway option and the Tory Right were going to reject it too, the Parliamentary numbers suggested that this option was a non-starter. The final nail in the coffin of the Norway Option was delivered in December 2017 by way of Mr Barnier’s famous descending step chart, which pointed out that insofar as the UK insisted on full control over its own immigration borders – one of Mrs May’s “red-lines,” the Norway option simply wasn’t available.

Fast forward now to May 2018, when I produced another Flowchart (see image below). 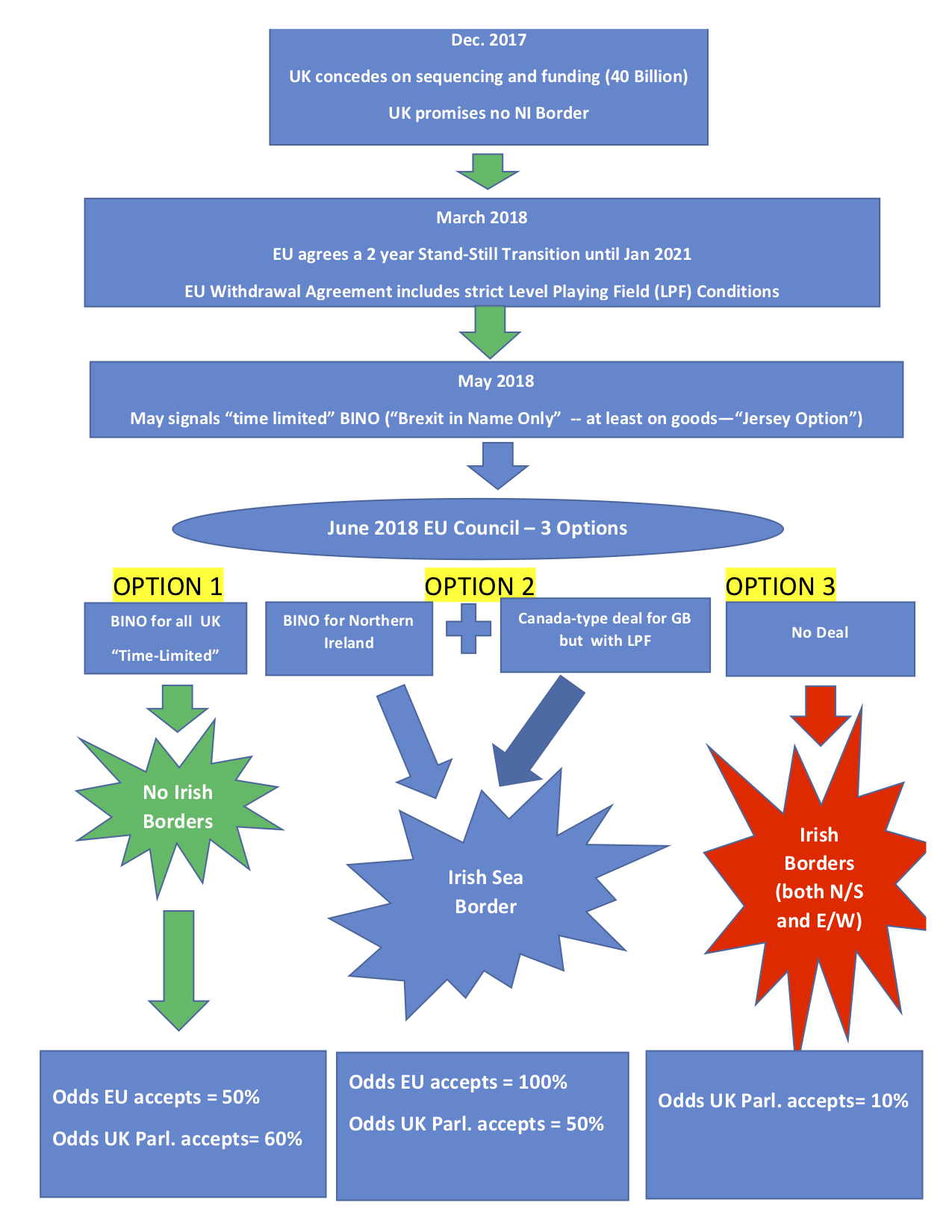 A lot had changed. Perhaps most significantly, it was clear that the UK Government’s internal divisions, its inability to formulate a clear policy, meant that the EU possessed all the power. Outcomes reflected this. The other big change was that the red lines staked out by May in 2017 had started to turn pink. The Mansion House Speech marked a big retreat from the position staked out in her Lancaster House Speech. And by May, there were signals that Mrs May was entertaining the possibility of de facto remaining in both the CU and SM (albeit with a fudge on the timing). Last week’s European Council summit, once billed as a make-or-break moment for Brexit, turned out to be an utter anti-climax, and so the underlying dynamic remains the same.

Given these changes, I now think, there are only three options still within the bounds of possibility, which I call in the Flowchart Options One, Two, and Three. These are the Options that will form the basis of discussions for the rest of the year.

Option One has been called the Jersey Option in various writings by Samuel Marc Lowe and John Springford. On this model (also sometimes referred to as “Brexit in Name Only” [BINO]), the UK would remain in the CU and the SM, but only for industrial goods and agriculture–not for services. The advantages of this model are threefold. One, it would solve the Northern Irish border problem. Two, it would leave the UK free to control immigration. And three, it would allow the UK to keep its just-in-time manufacturing. The disadvantages for the UK would be that industrial goods and agriculture are sufficiently large parts of the economy to entail that the UK would only be Taking Back Control to a limited degree – i.e. the UK would not be fully sovereign (i.e a rule maker) in a key area of the economy. The disadvantage to the EU is that Option One seems to allow the UK to cherry pick – i.e. to opt out of one of the four freedoms – FoM – but opt-in to a significant part of the SM. Many observers think – and I agree with them – that the EU will reject this Option for anything more than a strictly time-limited period.

Option Two solves the Northern Ireland border by setting the border between the UK and the EU (at least for industrial goods and agriculture) in the Irish Sea. This would allow May’s Government to keep their promise of no physical infrastructure at the border, but in doing so would consign Northern Ireland to a unique and different constitutional status than Great Britain. The relationship between Great Britain and the EU would be settled by a Free Trade Agreement as envisaged by the EU Withdrawal Agreement. This would entail strict Level Playing Field conditions that ensured that the UK would not undercut the EU in employment, environmental, or other regulations.

Option Two would, I think, be entirely acceptable to the EU. Indeed, this option is pretty much the Option described in the Withdrawal Agreement. It is hard to believe, however, that this Option could get through the current UK Parliament. The DUP certainly wouldn’t vote for it; nor would the Tory right-wingers gathered together in the ERG. Even Mrs May herself said that no British Prime Minister could ever vote for such a proposal. So if Option Two will not pass the UK Parliament, this leaves only…

Option Three. This Option would involve “No Deal” at all between the UK and the EU, and would mean that the UK would trade with the EU on the terms of the World Trade Organization. This Option would require a breakdown in negotiations between the UK and the EU. Given its obvious drawbacks for the UK in such an outcome, it remains, I think, the least likely. The Government has done nothing to prepare for such an outcome; and one might legitimately presume that Mrs May will go to any lengths – include endorsing Options One or Two – before she would allow Option Three to prevail.

This uncertainly, this lack of any clarity on how things will end up, takes me back to the last page of the Whodunnit I mentioned at the start. We still do not know which option will prevail—even if we have now whittled down our suspects to Options One and Two. My guess is that Option One will form the basis of an agreement between the UK and the EU. This Option will come with a long transition or implementation period, during which time the UK and the EU work out the details of Option Two. Doesn’t this entail an Irish Sea Border? Isn’t this something that Mrs May had said no UK PM could ever support? Yes. But I think Mrs May will hope that the transition period will extend beyond the next UK General Election (due to take place by 2022), by which time she will hope to have a larger majority and will not need to rely upon the DUP. In any case, that’s the best I can come up with. Can you do better?